NASHVILLE, TN (March 16, 2020) In the wake of the recent tornado in Nashville, Gibson Gives–the charitable arm of Gibson–launched a Guitar Recovery Program providing immediate support and giving a guitar to any musician whose instrument was damaged or destroyed in the Tennessee tornado.

With over 500 musician inquiries last week, Gibson Gives is working to make musicians affected whole again by replacing a guitar (any brand) for all musicians that were affected by the Tennessee storms. Musicians dropped by the Gibson USA Factory—our flagship Gibson USA Factory was 6 miles away from the storm, and Gibson downtown Nashville headquarters, 2 miles away from the tornado–to pick up their new gear on Thursday, March 12, watch the recap video

Musicians who lost their guitar in the recent storm, can still reach out to the Gibson Gives Guitar Recovery Plan with their story via: donation.request@gibson.com. For more information, visit: www.gibsongives.org.

CBS Evening News with Norah O’Donnell stopped by the Gibson USA Factoryto speak with the band Goodbye June about their recovery after losing their home and instruments. Watch the full CBS story HERE. 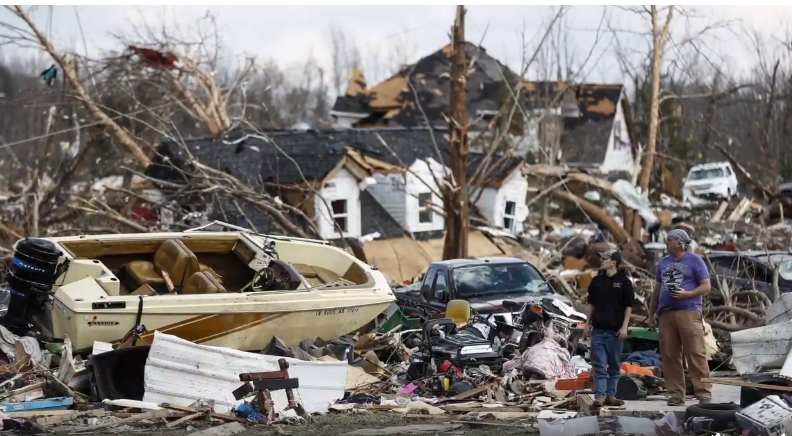 Nashville is Gibson’s hometown, and employees across Gibson Brands–including Factory workers, Distributors, Music Store partners and HQ executives–gathered to help the community which is in great need of basic supplies. Gibson’s 23-foot trailer brought in the supplies and was donated to help Hands On Nashville deliver goods to designated community pick-up sites throughout the Nashville Metro area and heavily- afflicted Putnam County.

Since launching last July, Gibson Gives is moving close to its goal of donating 1000 guitars in 1000 days, and has given 588 guitars (not including the 380+ pre-selected and approved for tornado relief for musicians). Gibson Gives has become the exclusive provider for the following charities: High School Nation, Musicians On Call, Guitars For Vets, eTown, NVAK.