SEOUL, SOUTH KOREA — With the introduction of the KX300 Etched electric guitar, Cort Guitars proves that what’s new isn’t always shiny—sometimes it’s desirably edgy and organic. Players who are more keen on a dark stage presence will be drawn to the esthetic of the KX300 Etched, which is covered in matte black and accented with red or gold paint applied only to the wood grains. However, they’ll find that the raw impact of this guitar goes beyond its surface, resonating through the instrument and translating to a unique tonal response.

Cort’s prior introduction of the KX300 to the KX Series brought intense design and styling to a boutique level of quality. The new KX300 Etched adds an even more distinctive look to the double-cutaway body with all-new color finishes of etched black red (EBR) and etched black gold (EBG). Cort starts with a 15 mm solid ash top that’s sand-blasted for an open-pore finish and then treated with either red or gold color accents on the matte black background to exude an organic vibe. But, like other guitars in the KX Series, there’s more to the KX300 Etched than meets the eye. 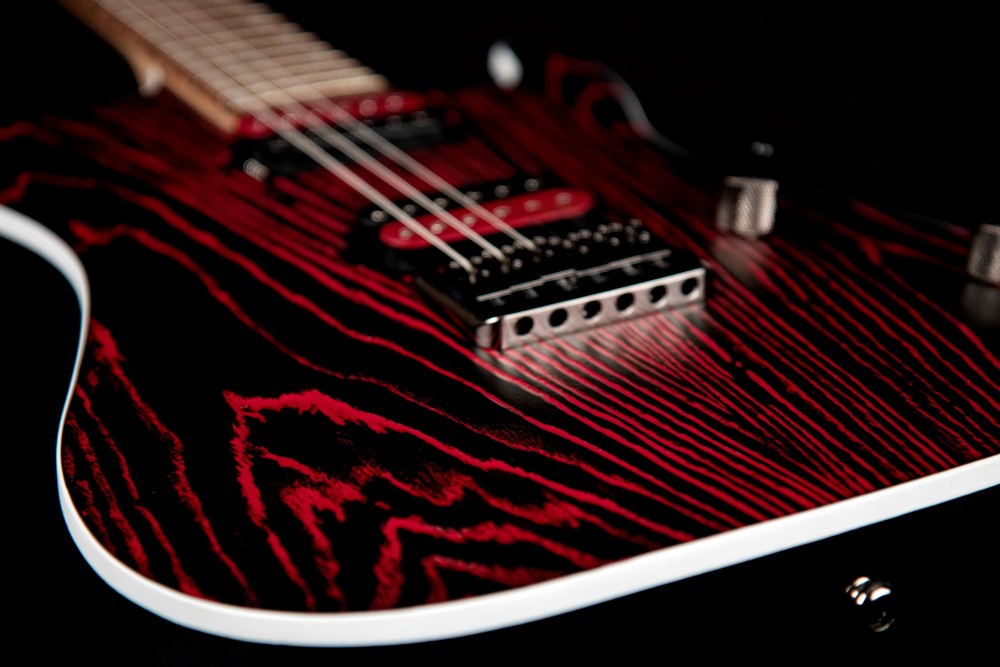 The ash top of the KX300 Etched is perfectly complemented by its mahogany body to produce a warm and thick mid-low range tone with sparkling and punchy highs for clearer definition in mixes and live playing. The newly designed high-mass hardtail bridge is added to improve sustain as well as resonance. Aside from its visual appeal, the double-cutaway design enhances the playability of this guitar, which has bolt-on construction for a big, open sound. The hard maple neck has a 24-fret pau-ferro fingerboard with a 15.75” (400 mm) radius and 25.5” (648 mm) scale. Pau-ferro produces strong fundamentals and volume projection with an emphasis on the high-mids. The unique “raindrop” fingerboard inlay furthers this guitar’s distinctive look.

The KX300 Etched was designed for today’s metal sounds, and that’s abundantly clear when it’s plugged in. The EMG® RetroActive Super 77 dual humbuckers are reminiscent of designs from the past, but utilize the benefits of technological advancement. EMG has taken a traditionally wound PAF (Patent Applied For)-style humbucker and incorporated a preamp specifically created for the sound that players crave, resulting in a tonal response that reacts unlike anything they’ve heard before. Ideal for riffs and solos, the Super 77s provide a very clear high output with superb articulation and focus on the low strings and a singing high-end. Moreover, they’ve been tested and proven by the existing KX300 models to be an excellent match for the mahogany body.

Cort keeps the controls on the KX300 Etched simple yet effective, with a 1-volume, 1-tone and 3-way toggle switch for a variety of excellent sounds. While the humbuckers have corresponding colors to the finish, the controls and other hardware are black nickel for a final gothic touch.

While the KX300 Etched is drawn to the darkness, its reasonable price tag at MSRP $749.99 is definitely a bright spot among other boutique-style guitars. Learn more about the KX300 Etched and other guitars in Cort’s KX Series at www.cortguitars.com