San Francisco, California – May 28, 2020 – Before he became a GRAMMY Award-winning studio engineer and producer, Aamir Yaqub honed his professional chops at London’s famed Metropolis Studios, which has earned a reputation as Europe’s No. 1 independent recording studio. He first got his foot in the door at Metropolis in an administrative role, then worked his way up from an intern before landing a role as an assistant engineer — then, finally, as an engineer. Since that time, Yaqub has worked with a long list of artists — including, Alicia Keys, David Guetta, Migos, Rihanna, J Cole and Sia. Now, working in high demand as a full-time freelance studio engineer and record producer, whenever he takes a mixing assignment, he might decide to mix in either The Bison Room or The Aquarium — two production rooms in East London he completed in December last year. Or, he may start working “in the box” remotely, from anywhere convenient, with his favorite pair of monitor headphones. Or — like a growing number of music industry professionals today — he could also just stay home for as long as he needs, mixing records in a makeshift studio he has set up in his home.

Wherever he decides to work, though, Yaqub relies on Sonarworks Reference 4 studio calibration software to provide balanced, flattened equalization, whether on his calibrated headphones, or in any room where he has tuned the monitors in his workspace using the Reference 4 Studio Edition calibration microphone. Now, whenever he starts a new mix, in addition to having more confidence in the accuracy of the mix he hands off to be mastered, he can also ensure he gets full value of studio equipment he has invested in already himself — from studio monitors, to effects pedals and software plugins. 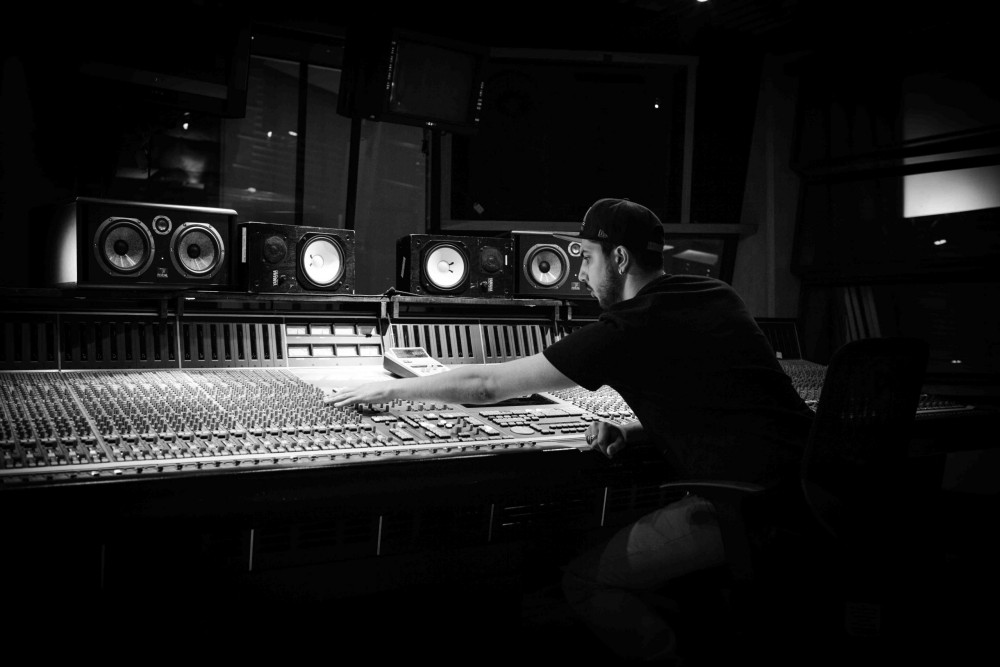 “Because I cut my teeth in one of London’s best studios, I had been spoiled.” Aamir said. “When you’ve worked in-house in a complex like Metropolis — which has four rooms you can track in, all of which were designed by an acoustician — but then, later, when you decide to become a freelance engineer, you find you start working in a lot of different rooms from the kind you’re used to. Metropolis had such a high level of clientele coming through, and I’d gotten used to being around high-end preamps and large, expensive consoles. I’d also gotten used to the way that the rooms sounded — which was, of course, amazing. So, when I started working in some of the other rooms, I would think to myself that these other rooms didn’t sound the way they needed to sound. That’s when I began searching for solutions.”

Finding fast-tracks to creative flow
In addition to the experience and expertise he accumulated during his previous tenure at Metropolis Studios, another reason Aamir Yaqub continues to be widely requested by both world-renowned artists and independent up-and-comers alike perhaps has something to do with his respectful recognition for the potential number of work-hours that might have been devoted to a record before it even hits his studio monitors for mixing. “It’s very important, I think, that mix engineers don’t take a record and say, ‘I’m going to completely reinvent this for you,'” he said, “because the artist and the label may have listened to that song for a year before they got it into the form they’ve asked you to mix.”

In order to achieve the same high-caliber results that he learned to get while working in an acoustically designed and treated studio room, Aamir breaks down the full scope of work required for completing studio projects into a system of separate tasks lined up one after the other. These tactical habits have helped him to maintain a steady pace and productive workflow, as well as to overcome any external distractions — or any internal resistances. 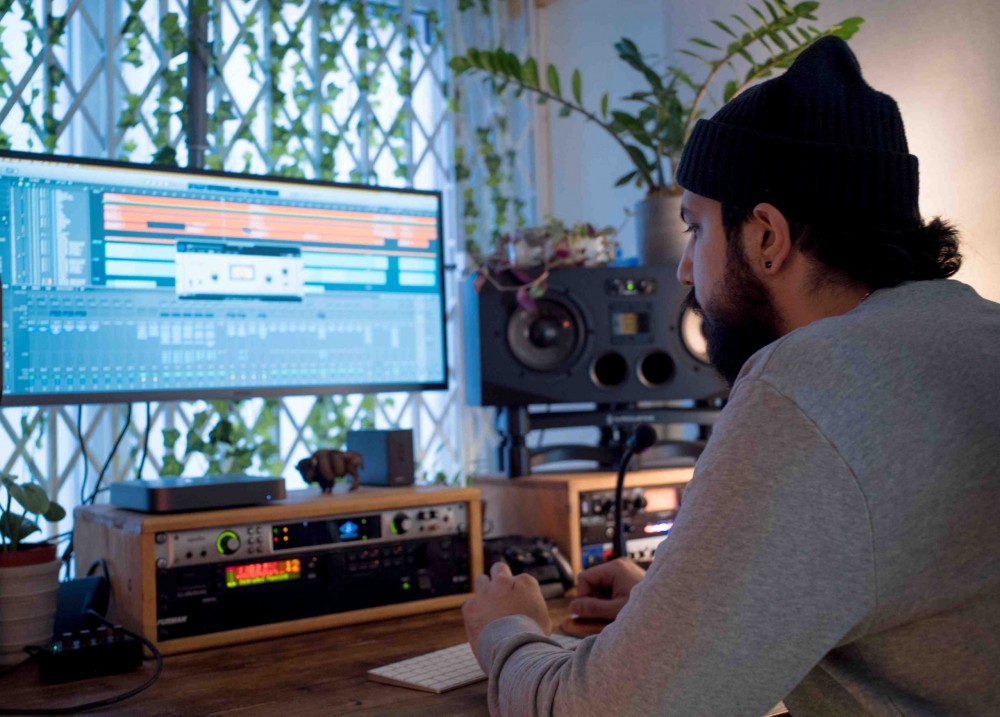 When he agrees to mix a new project — no matter where he decides to work — he always starts his process with a series of steps that provide him with potential entry points where he can find himself seemingly swept up into a familiar state of creative flow. Once he’s found his way into this flow state, he’s better able to tune out distractions, internal or external, and take each incremental task to completion. He explains that by breaking each project up into a series of smaller, sequential tasks, then making a habit out of working on one task at a time from start-to-finish, he maintains his ability to keep multiple ongoing projects moving forward.

“Basically, every time I start mixing, I begin by first creating a static balance, which could take me a half-hour, maximum.” Once a static balance has been created, he then mutes everything, except for the vocals — which he says are “the star of the show” — making sure they glisten and shimmer before he adds any instruments back in. After he’s pleased with the vocal mix, he starts in on the rhythm section, paying particular attention to low-end thumps, while making sure the vocals don’t lose any of their sparkle under any of the instrumental tracks added back in. Then, once he finishes mixing the rhythm section and any additional instrumental tracks, he’ll start to finesse the reverbs and delays, adding sonic space and depth, adding any finishing touches to the mix, before reminding himself to listen once again with the big picture in mind and, finally, sending it off to be mastered.

Investing in added value
Over the course of Aamir Yaqub’s years working as an engineer at Metropolis Studios, and ever since, he’s perused, tested and professionally employed countless studio equipment products — from hardware, to DAWS, to software plugins and everything in between. Metropolis was also where he was first introduced to the concept of tuning the room by performing a series of measurements, using a reference microphone, throughout a room. But, it wasn’t until he started working on his own as a full-time freelancer that he began to wonder whether Sonarworks Reference 4 studio calibration software could help him to improve the sound in studio rooms outside of the ones he was used to working in.

Now, even when working from home — which he’s been doing a lot more lately — he says Reference 4 has given him confidence that every mix he sends off to a mastering engineer will be as accurate as if he’d mixed it at the studio he came up in. As an example, he cited his pair of Genelec 8040 monitors, which he bought when he first started his career in recording. Ever since calibrating his Genelec monitors with Sonarworks Reference 4, he reports that it now makes no difference to his mixing process whether he worked on it in a state-of-the-art commercial studio or at home using the studio monitors he’s had since graduation.

“I love the Genelec sound,” he said. “So, I already trusted them — but I trust them even more now, since I installed Reference 4. I had used those speakers for so long, but they had never been in a tuned room, or an acoustically treated room — so, when I first installed Reference 4, I thought to myself, ‘These speakers have never sounded this good!”

Going further, he says that any studio owners looking for the simplest surefire ways to guarantee a higher return value on their existing equipment investments, when it comes to potential sound quality, should start using Sonarworks Reference 4.

“If you paid $3,500 for a pair of speakers, you want to get $3,500 worth of sound-quality coming out of them,” he continued. “If you don’t use Sonarworks Reference 4 studio calibration on your monitors, you’re not going to get that full value; but, with Reference 4, you definitely are.”