(New York, NY) September 21, 2017 — Native Brooklynite Christina LaRocca announces the Child of the Sun tour dates, which kick off today. The Americana guitarist/vocalist is stripping down her set for intimate breweries and coffeehouses and advancing two forthcoming singles, “Child of the Sun” and “I Am Only Human”, both produced by Robb Torres. The songs mark her first commercial project in six years and can be streamed ahead of release HERE.

“This tour is incredibly important to me. I have spent years working with artists, booking thousands of shows as a profession, and never having the confidence in myself to put myself on the road. At one point, I gave up on the idea of being a musician. I stopped singing, I put down my guitar. I didn’t write. I let the stress of working in the industry get to me, but it started to rot my soul, I started to die inside, became jaded, unhealthy, depressed. But then, I had an epiphany, and there it was. I realized I wasn’t taking my own advice that I had been preaching in my music. So I decided it was time to focus on me, my happiness. I took the dive into the unknown and the universe caught me.

LaRocca, a member of the Recording Academy, switched coasts in 2014, and the now Los Angeles-based musician, found inspiration in her trek out west. The colors of New Mexico, the glowing fields of Nebraska and sheer power of The Rocky Mountains reignited a spirit of living life and creating and can be held responsible for the artist’s organically rustic influences that harken back to Sheryl Crow, Janis Joplin, Bonnie Raitt, Fiona Apple and more.

Raised in an Italian family and a descendant of professional musicians, Christina grew up surrounded by the musicianship and quickly developed her voice in the Americana, rock and folk realms. Sunday was never a dull day in the LaRocca household, which was always full of music. LaRocca, a mover, and shaker in the music business at-large founded L Rock Entertainment, an entertainment promotion company, and has booked shows for more than 2,000 artists worldwide. She’s performed alongside Café Wha Band, folk artist Ryan Martin and hip-hop artists, The Higher Concept which leads her to meet Josh Glazer of J Glaze Productions.

A complete list of the Child of the Sun shows is listed below. 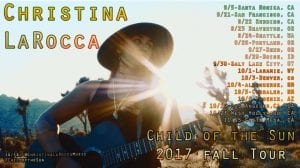