Antigone Rising’s brand new music video for their song “Get To You” officially hit cyberspace yesterday: 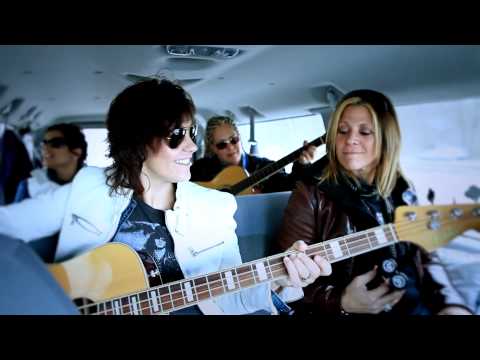 The all-female-boot-stompin’-alt-country-rock band filmed the music video with directors Jie Yi and Valerie Lasser during their run of New England tour dates back in March 2014. The catchy track is taken from the band’s newly released EP “Whiskey & Wine – Volume 1,” which dropped on iTunes and their official website March 25th, 2014.

The concept of the “Get To You” video is meant to invoke the sense of bonding and spiritual sisterhood that naturally forms and is collectively shared between all band members while on the road, living together in close quarters for long periods of time, be it on a tour bus or on stage.

The music video gives an exclusive behind-the-scenes glimpse into Antigone Rising’s tight-knit camaraderie which provides all four of them – Kristin Ellis-Henderson, Cathy Henderson, Nini Camps and Dena Tauriello – a much-welcome backbone and support for the long weeks spent away from home and from their loved ones. “Get To You” ultimately shows how on the road, Antigone Rising is a family.

Antigone Rising was the first band on Starbuck’s Hear Music (Lava Records) that exploded into the spotlight selling over 150,000 copies of their debut LP and landing in the top 20 of the “Billboard Heatseekers” chart for an entire year.

Since then Antigone Rising has gone from touring with such prestigious acts as The Rolling Stones, Aerosmith, The Allman Brothers Band, The Bangles and Rob Thomas; traveling to the Middle East, spending time in Israel and the West Bank as cultural ambassadors for the United States Embassy, to making national headlines for having its co- founding member, Kristen Henderson featured on the envelope-pushing cover of Time Magazine‘s Equality issue.

With an enduring success that ensures constant touring, it’s hard to find a band currently busier than Antigone Rising.

Doing things very differently with these releases, the band plans to put a laser focus on each and every song on the 2 EPs.

The goal is to stay connected and involved with the fans who have always been the lifeblood of, and the most critical part of the band’s formula for success. Fans can expect loads of Antigone Rising content with videos, behind the scenes footage, and alternate mixes and versions.

Behind the Scenes Photo

Showing no sign of slowing down, at the root of it all, Antigone Rising is keeping their minds focused on one goal: to “Get To You”!