Many guitar players will start their journey strumming along to their favorite tracks with some simple chord changes. But what if you want to break out of the simple strumming and take your playing a little deeper.

In this lesson, we’re going to look at the basics of fingerpicking and how you can start applying this to your playing to really take your chords to the next level.

All of the examples in this lesson use straight 8th notes, which means you’re playing two notes on every beat. 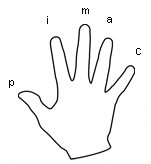 Fingerpicking is when you play individual (or pairs of) strings with your fingers on your strumming hand, as opposed to a plectrum. There is a tonal difference which you’ll hear right away. Playing with your fingers will give a softer sound and make the notes feel more joined up and smoother.

Before you start, you will need to label your strumming hand fingers so that you can identify which fingers to use for each of the exercises in this lesson.

In this lesson, you won’t be using the little finger (labeled with a C); you’ll just be using the thumb and the main three fingers (P I M A).

This simple ascending picking pattern is great for building finger independence. Play all of the root notes with the thumb, and anchor the 1st, 2nd and 3rd fingers to the G, B, and E strings.

The only finger that changes string is the thumb in line with the moving root notes for each chord change.

This example mixes the pattern up slightly. Instead of climbing through the higher three strings, you will only use your first and second fingers to play notes on B and G strings.

The thumb follows the same pattern following the root note across the E, A and D strings while the first and second fingers stick to the B and G.

This example is the same pattern as the first, except instead of ascending through the higher three strings, you descend instead. This follows the same rule as the first example, where you anchor the thumb on the lower notes of the chord and the first, second, and third fingers on the higher strings. This time, you’re leading the descending group with the third finger.

This example mixes up both Example 2 and Example 4. It’s not uncommon to encounter more complex fingerstyle arrangements like this; even if the rhythm is straight, the arrangements of the notes can still be complex.

Start slow with this one; it will take a while to get the dexterity of the fingers correct.

How to Play Ambient Guitar