Sharon Isbin is a world-renowned guitarist with over thirty albums, three GRAMMY’s, numerous other awards, and nearly a million sales. The Atlanta Journal called her “the Monet of classical guitar.” She recently won the 2020 Musical America Worldwide Instrumentalist of the Year award—the first guitarist to receive this accolade in its 59-year history.

In continuing with her signature versatility, Isbin released two very different albums entitled Affinity and Strings for Peace in May of this year.

You released two new albums in May of this year—Affinity and Strings for Peace. What did recording and releasing two albums in a very similar time frame look like for you?

During April-June 2019, I was selecting takes and mixes from three different albums at once, including Souvenirs of Spain & Italy, released in August 2019. I barely had time to sleep!

Was the recording process different from one album versus the other? 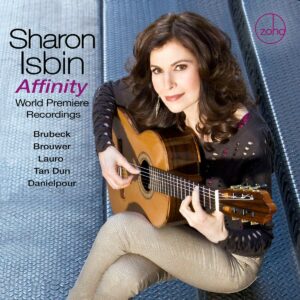 For Affinity, I recorded the concerto written for me by Chris Brubeck one afternoon in September 2018 on the only day the Maryland Symphony, their conductor Elizabeth Schulze, Strathmore Hall, the producers, engineers, and I were all available. I recorded the other tracks in May 2019 in a concert hall in upstate New York during the three days that the recording team, two guest artists, and I had free. As Executive Producer, I was responsible for booking the venue and creative team, as well as fundraising, no small task! Everything had to be edited and mixed a month later in June before my engineer and producer left for the summer. 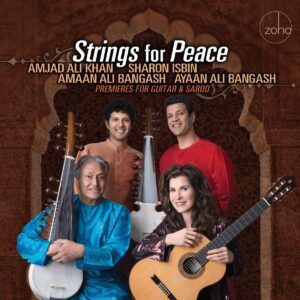 I recorded Strings for Peace in April 2019, two months after my tour in India with the Khans. The music for guitar and sarod composed for me by India’s legendary sarod master, Amjad Ali Khan, was so inspiring and beautiful that we realized we had to record it. Fortunately, Amjad and his sarod virtuoso sons Amaan and Ayaan Ali Bangash, all of whom live in India, had two free days during their US tour. So on short notice, I booked the one excellent recording studio in New York City that was available. We acted as our own producers, even selecting takes and edits on the second day. Soon after, Ayaan found a brilliant engineer in India, Sai Shravanam, to mix and master. That plan was delayed until October 2019, however, because Sai lives in Chennai, a city stricken during the summer by one of the worst prolonged droughts in the region’s history. With no available water, he had to flee with his family to the countryside for two months.

Affinity contains pieces that were written for you by multiple accomplished composers from all over the world, each piece with a different story behind it. What was it like to create an album with such diverse music styles?

The music was ready to go, in my mind and fingers, as I’d performed it many times over the years. I had premiered the exciting jazz and Middle-Eastern influenced Brubeck concerto with the Maryland Symphony in 2015, and gave multiple performances with other orchestras in the three years following. Chinese composer Tan Dun (of Crouching Tiger, Hidden Dragon fame!) worked with me closely on his Seven Desires for Guitar, a fascinating work that unites the spirit of the ancient Chinese lute or pipa, with the Spanish flamenco guitar. Carnegie Hall commissioned Danielpour’s Of Love and Longing, with its evocative lyrics by Persian poet Rumi, for me and star vocalist Isabel Leonard who premiered it with me in 2015 and who sings it on the album. Cuba’s Leo Brouwer wrote El Decameron Negro for solo guitar as a surprise gift for me years ago, and I’ve been performing it ever since. The work’s three colorful ballads are inspired by love stories from Africa collected in the 19th century.

One of the pieces on Affinity, “Waltz No. 3 Natalia,” was written by Antonio Lauro, who has been called “the South American Gershwin,” and was composed as a two-guitar arrangement. Do you enjoy working on duets?

I’ve played duets for years, including with rock star Steve Vai, and jazz guitarists Stanley Jordan and Romero Lubambo, all of whom guest on Guitar Passions. A few years ago, I began performing duo shows with my former student Colin Davin. I’ve never forgotten the wonderful experience of playing Venezuelan composer Antonio Lauro’s waltz Natalia, titled after his daughter, some years ago in Caracas, where I was joined by Natalia, who improvised on a cuatro. Since Colin is an excellent arranger, I asked him to compose a second guitar part in that folk style, resulting in the beautiful version we play together on Affinity.

The title of this album (and the title track), which is based on the concept of attraction between particles, were inspired by your interest in science. Is there a specific discipline of science that you find yourself drawn to?

Science was my passion in grade school. My father used to bribe me to practice by saying I couldn’t launch my model rockets until I’d put in an hour on the guitar! Years later, renowned Canadian astronaut Chris Hadfield took up one of my CDs in the Space Shuttle Atlantis and presented it to cosmonauts in MIR as a gift. See a photo of it floating weightless with Earth outside the window! 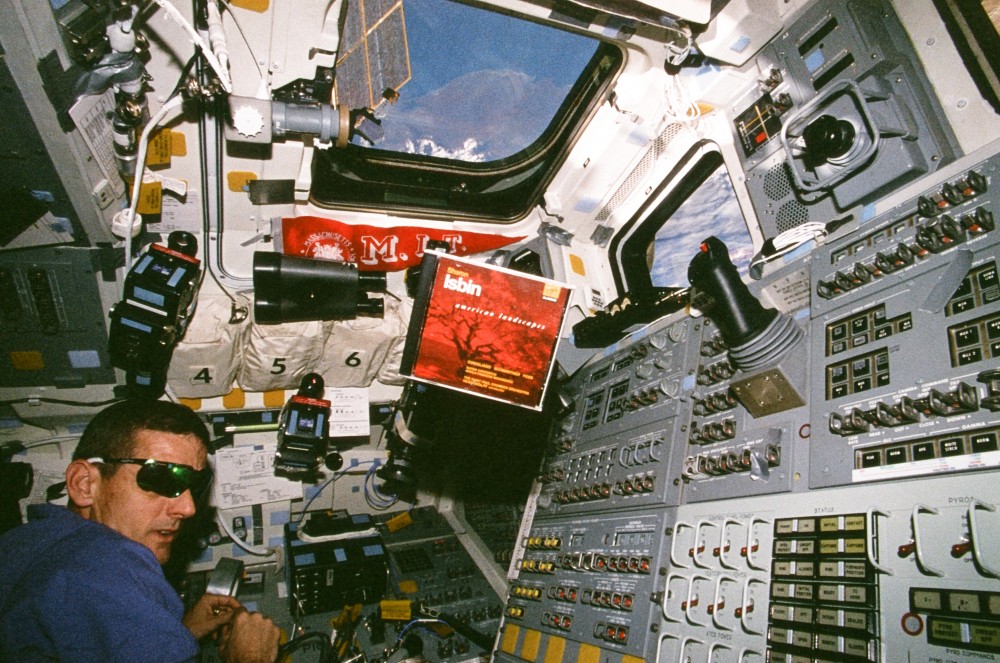 I’ve been friends for many years with Harvard physics professor, researcher, and bestselling author Lisa Randall. We talk about particle physics and the Higgs Boson over dinner!

Strings for Peace contains multiple pieces that are written in the style of Indian ragas, which are typically just frameworks of melody, and designed for improvisation. Did you get to do a lot of improvisation work with these pieces?

When the sarod improvises in slow Alap intros, I improvise accompanying bass notes and chords. The more complex guitar improvs are written out, to which I add slides and embellishment. The ingenious guitar arrangements Amjad has created with Kyle Paul bring our two worlds together in a magnificent and compelling way.

Strings for Peace has quite a different sound than your 2019 album, Souvenirs of Spain and Italy. Do you enjoy getting to make albums that are centered around specific geographical areas? Can we expect more of that from you in the future?

My recordings each have a concept that unites the music—geography happened to be the case in these two, and as well others like Alma Española and Journey to the Amazon. But having released four CDs in less than three years, it’s too soon for me to think about what might be next.

You got to work with three different sarod artists on this album, the sarod being a stringed instrument that is primarily played in India. While recording, did you get a chance to try your hand at the sarod? What was that like?

Since the sarod has no frets and a metal fingerboard, players sport long fingernails on the left hand to navigate pitches and slides. That rules me out as my instrument requires short left-hand nails!

You had a tour scheduled for this album. Has the schedule for that been affected by the COVID-19 pandemic?

We were to begin our US tour in July at the Tanglewood Festival, but everything from April-December has been postponed or rescheduled. I’m more grateful than ever that we completed the recording in time for release last May! Titled over a year ago, in the spirit of healing and harmony, we never imagined that Strings for Peace would emerge at a time the world would be suffering from a global pandemic and engulfed in violence. Listeners and reviewers alike have been drawn to the healing and comforting powers of our music, and we feel fortunate to offer this so genuinely from our hearts.

Albums can be purchased on Amazon: