I grew up on a working farm in upstate New York’s Mohawk Valley and was fascinated by the fiddle for as long as I can remember. There was always music playing on the radio, or records and cassettes on the stereo — mostly old country, folk, bluegrass, and other traditional music styles. My maternal grandparents were involved in the local bluegrass and old-time music scene, and as a little girl, I attended a lot of the concerts and jam sessions they helped organize.

They gave me my first violin at the age of four, and I studied both classical violin and fiddle styles and started my own band when I was nine. I took up the guitar and began writing songs in my teens but wasn’t confident enough to release anything as a singer-songwriter until my twenties. (That was probably a good thing since I had done a fair amount of touring both nationally and internationally by then and had some real stories to tell that I wouldn’t have had earlier on.)

I’m still a major advocate for traditional music, especially the fiddle styles and tunes of New York state (yep — we have our own fiddle traditions!), but storytelling through a good song is what really speaks to me nowadays, especially with my new album, “Northeast.”

I’ve been influenced by the abilities of songwriters like Willie, Merle, Emmylou, Dolly, Kris, John Prine (and loads of others) to tell the stories of people, places, and times they’re in. I’ve also been influenced by the creative melting pots I’ve been lucky enough to spend time in as well, like the incredibly varied music scenes of NYC. Places like that taught me a lot about the fertile environment that occurs whenever you put a lot of intensely creative minds together in one place under pressure — you get the most incredible art, connections, and experiences — kind of like a beautiful metamorphic rock formation. But the images and experiences that are the most deeply ingrained in me are the ones I grew up with, the blue-collar, rural ones, and I feel like those are the stories I’m best suited to tell.

Who:  My name is Sara Milonovich, and I’m an alt-country singer-songwriter and fiddler from upstate NY.

What:  My new album, Northeast.

Where:  Available everywhere you get music!

Why:  I grew up on country, bluegrass, and other kinds of traditional music, and was always inspired by the way a good song could tell the story of a place and the people in it. Evoking that sense of place, time, and human experience has always been the hallmark of a great song to me. As I began exploring my own experiences as a songwriter, it struck me how many of those incredible songs were set in the south or west. I realized the northeast shares the same blue-collar experiences as the rest of the country — the down-and-out cities, abandoned farms, rural poverty, substance abuse, heartbreak, as well as the resilience and hope — except that it also happens to be a lot colder! Inspired by the sign on an abandoned factory loading dock in my hometown, I wanted to write a northeast alt-country record that shares some of those stories. 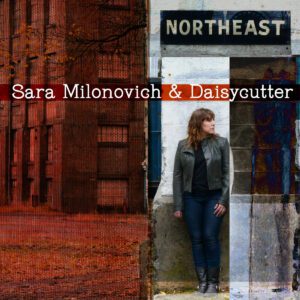