My name is Tatiana DeMaria and I am a British/Lebanese songwriter, artist, musician, and producer, born and raised in the UK and Paris on a diet of punk rock and hip hop. I started out producing underground UK hip hop and founding the rock band TAT as a young teen and got very lucky to have my dreams come true, to tour the world, and for it to become my full-time job. I had two charting singles as a teen in the UK independently with my band TAT, which helped kick off my career and get me out to the States where I wanted to tour.

We ended up playing five full Warped Tours, touring with NOFX, Bad Religion, Alice Cooper, Joan Jett, etc. and played over 1,000 shows around the world over six years off my debut album ‘Soho Lights,’ which you can peep on Spotify, etc.

I was also simultaneously writing, producing, and performing movie soundtracks (Blue Crush 2) and commercials (Pepsi, 7 Up, etc.), which is something I still do, and love the challenge of each project.

Most recently, I recorded eight songs for the new American Pie movie that just dropped, in which I’m also performing at their prom, which was a laugh.

I had been writing and producing in all different styles and recently decided to go solo because I didn’t want to f**k with the band’s identity and wanted the freedom to make whatever I wanted without f**king with the fans’ love for the rock ‘n’ roll TAT represents.

I now go under my name Tatiana DeMaria; I am a solo artist and make music that sounds like a blend of all of my influences and production styles from hip hop, punk rock, alt-rock, and R&B into a sound that feels like me. It’s still me writing and producing my music but is a more up to date expression of myself as a human and adult.

Currently, I have a bunch of singles out on all the streaming sites; feel free to go check ‘em out and blast ’em. Upcoming, I have an Acoustic EP coming out this year, my debut studio EP to follow, and debut studio album scheduled for 2021, which I can’t wait to drop. I’m also launching a songwriting course soon, so whether you’re a pro or have never written a song before, I gotcha covered, hit me up on socials, and stay tuned for it. 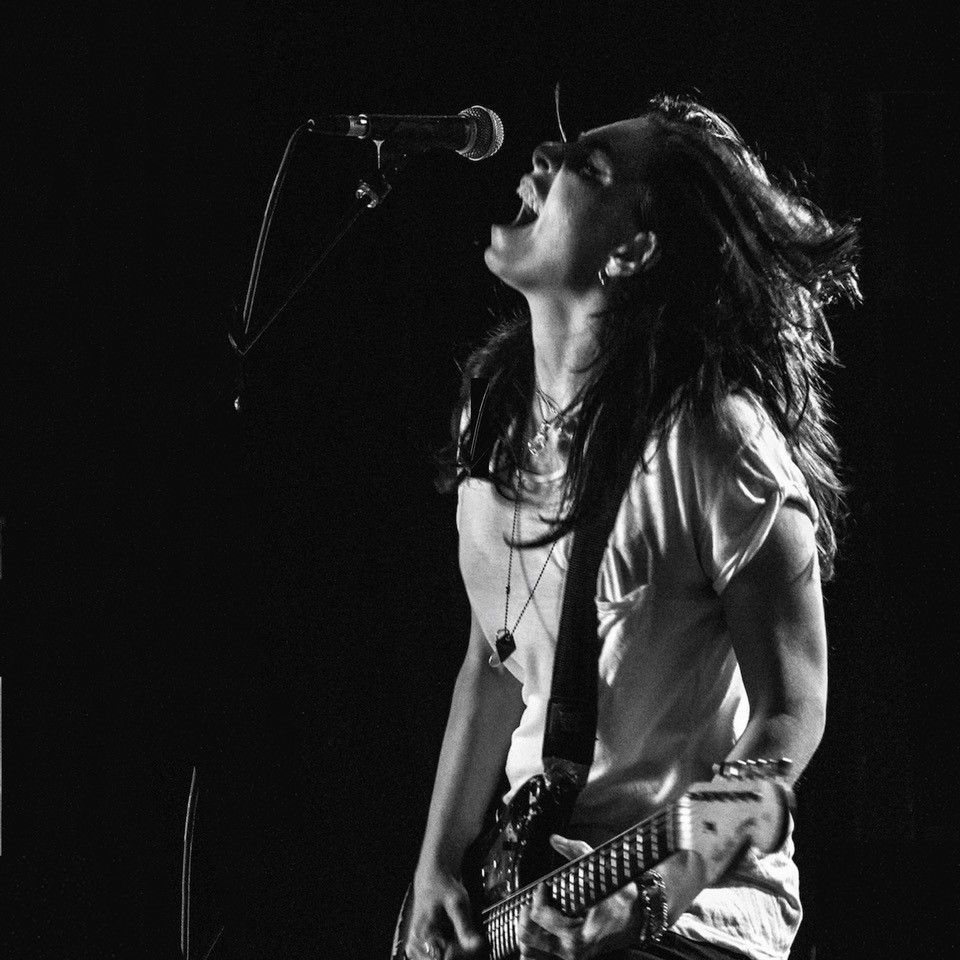 What is your definition of tone, and how has it changed over the years?
I’ve never thought to define it, but I’d say tone is an identity. It is the voice of a particular feeling and expression that has been distilled and translated into sound. My tone used to be straight up fat as f**k distortion to express the f**king rage and adrenaline I constantly had driving me. Over the years, I wouldn’t say I’ve mellowed, but I do channel my expression differently and tap into much more nuanced emotions, leading to a much more nuanced variety of tones. I now rely more on the song itself, the words, and the vocals to deliver the bite I used to let the guitar carry.

Which guitars, amps, and pedals are you currently using and why?
My main stage guitar is a 1962 Fender Jaguar. I play it through a Fender Deluxe Reverb or VOX AC30C2. I had been looking for a new guitar as I shifted from my band sound to the sound I was hearing in my head for some of my solo songs.

Jaguars hadn’t grabbed me before, but this one was different. When I picked it up, it was a live wire—more energy and tone than I had ever heard from a Jag, and it just gave me life. Felt perfect in my hands—and a dog had chewed the headstock, which was a bonus for me.

The Fender amp itself brings the best out of the guitar. Finding that full, warm, and alive clean tone was the goal, and it sounds perfect for what I’m feeling and going for currently. A lot of clean tones can sound a little flat and well behaved, but this hits the spot for me and cracks at the right moments, giving me just enough crunch and edge when I need it. The VOX AC30 is also great and achieves the same though remains cleaner for longer in the dynamic range, but amazing full tone.

What about strings?
Ernie Ball. Love the company, love the strings. I also use the Ernie Ball Music Man guitar on almost every record I make. It has an incredible variety and consistency of tones, which I love. I use it on everything from fat rock records to hip hop, synth-pop, and anything in between. 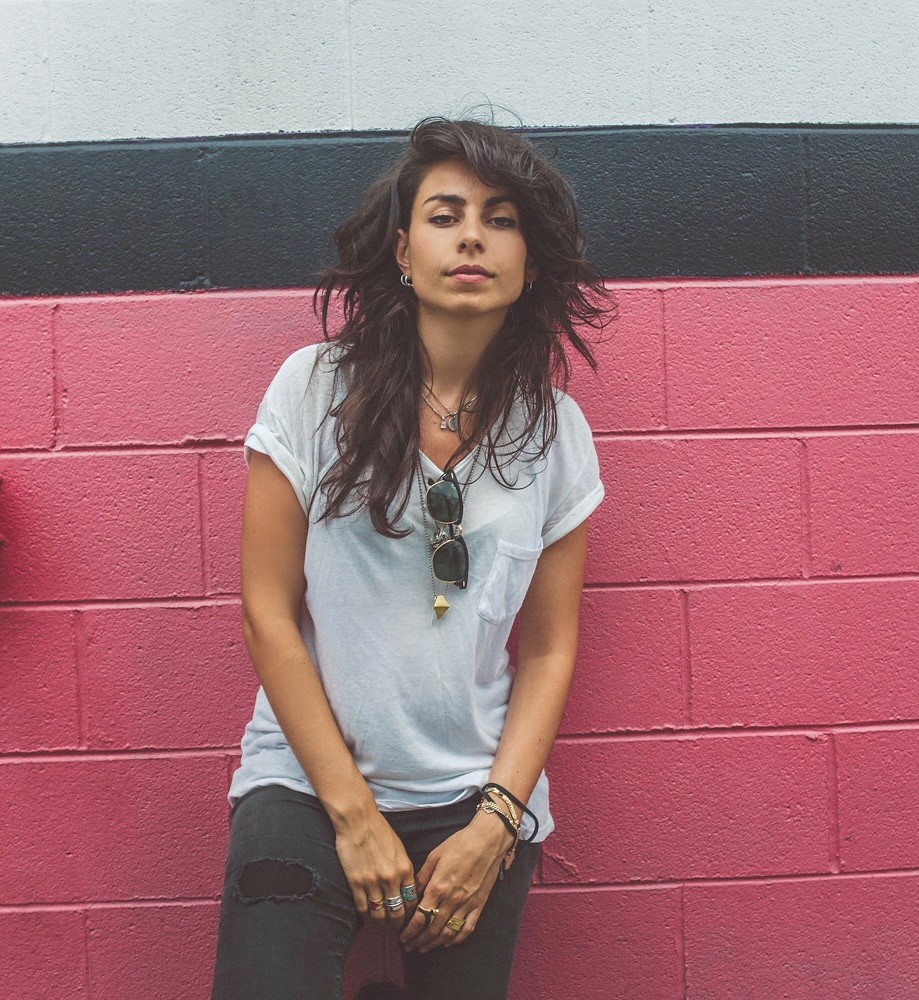 Are there certain recording techniques you prefer in the studio?
Depends on what I’m recording. I record in a lot of different styles, so everything from the guitar to chain will change. One staple is that If I’m going for a big rock sound, I use a technique I learned from Jerry Finn years ago (Rancid, Greenday, etc.): to put an SM58 right up against the cone and play on low gain.; you get that big fat crunch and distortion without it getting to the point of sounding thin.

How do you keep your sound consistent onstage?
I always start with getting a solid clean sound I can build off. Keeping the chain simple from guitar directly to the amp, I go for a full warm sound with enough tone to cut through and hot enough to break up a bit at the louder volume. Also, enough bass in it that when I add a pedal and some distortion, it doesn’t thin out. Anything else comes through the pedalboard. I get consistency from having a full, rich, clean tone to start.

What does your practice consist of?
I don’t practice anymore, to be honest. I wish I did, but having to run my career, the business, writing, producing, and speaking gigs leaves little time. So I’m still figuring that out. I warm up my body, my mind, and my voice with a morning routine, and I warm up my fingers before playing, but otherwise, I use the instrument more as a voice to translate what I’m saying and feeling at this current point in time.

Favorite guitar riff or lick that inspired you to play guitar?
“House Of The Rising Sun” by The Animals got me playing guitar in the first place. My eldest brother used to play it; it was the only song he knew, but I thought it was so beautiful, and he’s over a decade older than me, so I thought he was the coolest. My music teacher played that riff in class when I was eleven. It brought it back to me in a context of my own, so I flipped, and that was enough to get me playing. I was also into punk rock at that point, too, so I found online tabs, power chords, and I was set.

What is your advice for young women who hope to work in the music industry?
It’s like any other industry, get excellent at what you do and then go do it. In fact, there are fewer women who’ve mastered the crafts in this industry commercially at this point in time—although rapidly changing, which is great—so I would argue there is plenty of opportunity here. It is also less restricted than in some corporate environments where there are many more ‘official’ barriers of entry.

For female musicians in this industry, if we’re being bone real here, there are no barriers of entry other than being great at what you do. No one can take your ability away or stop you from growing in music. You can practice alone, learn alone, create alone, release alone. It’s all there. Get at it, become excellent and undeniable.

As far as industry jobs, There are dick heads everywhere in life, but I’ve always found that if you show up pro and get the job done, let ’em talk, let ’em think; the work speaks for itself. And if people can’t see past that, keep it pushing on to the next. There is also plenty of love for women doing a great job in this industry, so it’s also about finding people who can see your value or let you know when you need to grow more.