Songwriting allows me to free my mind so I can explore myself. My goal is to inspire others. Not every song will be happy, nor should it be, but every song I write is some authentic part of my life exploring feelings, emotions, and stories surrounding myself, including others around me. Writing songs is my talent and therapy; playing live is where I find freedom and am most comfortable. My music sounds like a west coast drive down a jazzy road of 7th chords and witty lyrics. My single Gold can be downloaded or streamed on all popular music sites, and my new song Car Talks is available now on all popular music streaming sites, including Spotify.

It’s hard to believe I’ll be graduating with an associate degree in Music Composition this Spring since I wrote my first song at 13 with very little music theory knowledge. I wrote this song as a result of feeling alienated after an abrupt relocation as a military child. In my elementary years, the Jacksonville Children’s Choir started my music appreciation and understanding how to sing while I was learning how to play guitar during a church fellowship. Music became my tool to cope with the recurrent uprooting and feeling like an outsider. One of our military moves eventually landed us in Los Angeles, offering many artistic performance opportunities for my growing skills. I started performing sets at some recognizable venues in Los Angeles, such as the Whisky-a-Go-Go, House of Blues, The Roxy, The Hotel Cafe, and a residency at the State Social House in West Hollywood.

I frequently joke about being typecast as the girl with a guitar when talking about the film roles I have booked as an actor. I booked three films in which all characters play guitar and love music as much as I do, Hitch Girl, currently in pre-production. Nasty Habits, released on Amazon Prime for which I have garnered six best actress awards while on its festival tour. Last, Summertime Dropouts, which is a full-length feature following high school friends as they deal with daily life and their passion for music while competing to get on the Warped Tour. My character “Lucy” is the lead guitarist in a girl’s pop-punk band named Late For Curfew. In this film, I am one of the six leading performers that make up two pop-punk bands Late for Curfew and Summertime Dropouts who want to compete on Vans Warped Tour. The film is packed full of a musically talented cast, including the band Simple Plan. The producers cast actors who were also skilled musicians so we could play live music together for the soundtrack and promos. The first day on set, we were laying down the band songs for the soundtrack and recording the anthems of this coming-of-age film. I’m very excited for this project to come to fruition.

I believe music can help heal and that everyone has music in their hearts. I’m honored being an artist ambassador for three non-profit organizations that enable me to use music as a way to interact with those in need via live-stream fundraisers, concerts, and hospital visits. First, Breaking The Chains Foundation.org uses art therapy to help patients heal as they recover from eating and mental disorders. Next, The Starlight Children’s Foundation.org raises money to help seriously ill hospitalized children and Free2Luv.org, who help to save lives by promoting love, kindness, and diversity through community events, concerts, and anti-bullying campaigns. My ultimate ambition is to share music as a proficient songwriter who gets to collaborate with the most exceptional entertainers in the business and contribute my talents to creatively rewarding projects making a difference. 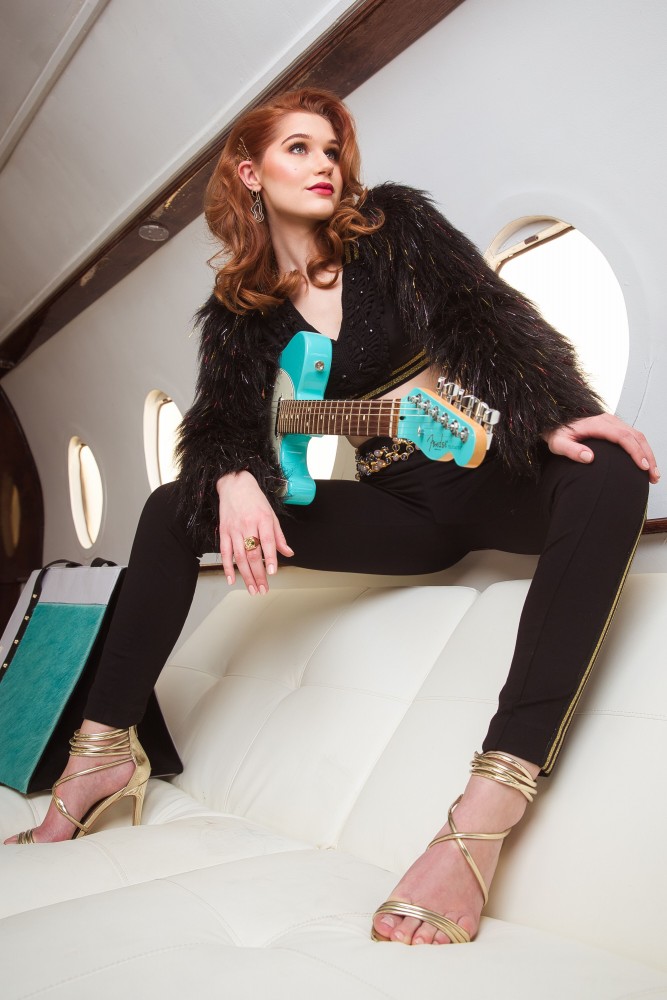 My OG guitar since I was 12 years old, has been a Taylor 214ce. It’s well-built, comfortable, reliable, and sounds equally great acoustically and when plugged in. Although I typically compose on acoustic, I’ve found that some songs make more sense when performed live on an electric guitar. As a result, the most significant change to my tone has been the regular addition of electric guitars in my live sets. When playing electric, my default is a middle pickup position, which I find is not too bassy or bright. I set all of the amp knobs to the 12 o’clock position, this opens up the volume and tone all the way, keep the pre-amp down as low as possible, and set the master volume of the amp for the room. I have a fingerpicking style and trust my fingers to provide control, subtlety, and nuance without using picks. Right now, I’m keeping it fairly simple.

Which guitars, amps, and pedals are you currently using and why?

In addition to my OG Taylor acoustic guitar, I’ve recently added a Fender Acoustasonic guitar to my collection. I’m blessed to work closely with Fender artist relations and to have their support. Thank you, Fender, for this lovely creature! It is a perfectly designed hybrid instrument that enables me to switch between acoustic and electric sounds without having to unplug. I play Fender electric guitars, including an American Standard Telecaster, a Player Series Strat, and a Player Series Jazzmaster through a Hot Rod Deluxe. The amp is fantastic and versatile, but at 40 watts, it can be a bit loud for the size of shows I typically play. I recently played a show at one of my favorite intimate venues, the Hotel Cafe in Hollywood. Their backline included a Vox AC15, which gave me a natural, clean tone with the minimal hassle that perfectly suited my style of music. It made me appreciate the benefits of lower-wattage tube amps. My current goal is to move toward something similar to a Fender Princeton soon.

To keep things tidy, I have a Pedaltrain Classic pedalboard filled with my current lineup of pedals that include an MXR Dynacomp, JHS Space Commander, Morley A-B switcher, Peterson StroboStomp HD tuner. My newest investment is a TC Electronic Ditto X4. After trying unsuccessfully to incorporate a different single-button looping pedal, I found the Ditto X4 to be refreshingly simple and intuitive. I’m a fan of the extra effects it allows me to add and the two separate looping circuits that can rotate seamlessly through verse-chorus-verse transitions.

My go-to acoustic amplifier is an easy to carry light-weight Fender Acoustasonic. It allows me to walk into a gig with an amp in one hand; a mic stand in the other, guitar over my shoulder, and then I plugin with everything I need to deliver a professional performance. The amp’s mid-century modern, stylish vibe keeps a classy and cool aesthetic. The ability to plug a microphone into one channel and a guitar in the other and just play is so much more desirable than having to haul a PA system around. The sound is big, clear, and perfect for small indoor and outdoor venues and spaces.

My composition style involves frequent slides and position shifting, and they minimize distracting string noise. I choose Elixir Nanoweb (.012-.053) or (.011-.049) always for acoustics! I appreciate the smooth texture and find they seem to stay in tune longer. These strings are definitely worth the extra price. I can’t recall a single situation where one broke unexpectedly.

I have an aggressive left-hand style and don’t bend too many notes, so I use heavier than most would select for electric guitars. I use Ernie Ball Slinky Classic strings (0.11-0.48) on my electrics. It also helps when switching between acoustic and electric to keep the feel more uniform. Skinnier strings can sometimes feel like wet spaghetti noodles, and I think it makes my playing sound sloppy. 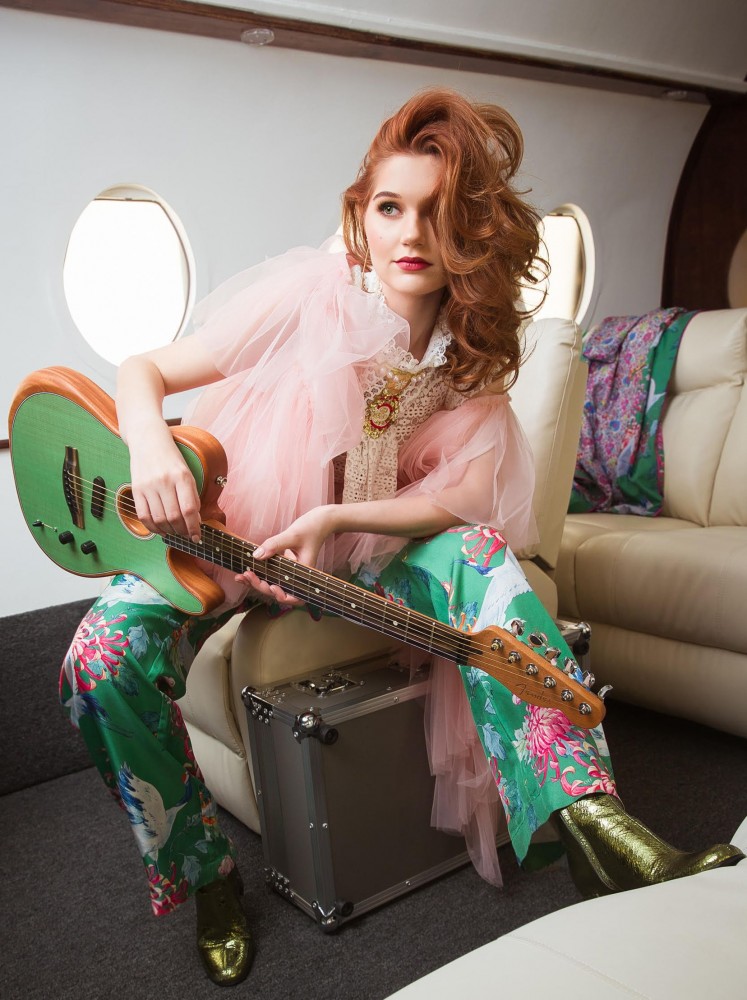 Are there specific recording techniques you prefer in the studio?

For acoustic recording, I have had success with mixing a large-diaphragm condenser microphone focused on the 12th fret with the Expression System 2 pickup output from my Taylor guitars. Studio tone for electric guitar is still a moving target, and usually involves a significant amount of trial and error depending on the room and gear available. I’ve begun experimenting with a mid-side recording technique for live work in the studio. It combines one microphone with a cardioid microphone as the primary source with another that has a figure-8 pattern to pick up the room ambiance. The appeal is the ability to celebrate engaging acoustic environments without having to resort to digital trickery or plugins. I’m considering recording an entire project with this technique.

While playing, I trust my fingers to create consistency. I keep it simple but also realized years ago that you couldn’t just assume the unknown person at the mixing board will take care of everything. It is worth those extra few dedicated seconds to make sure your levels are correctly set. It helps minimize distractions during a performance and provides a more enjoyable sonic experience for both the performer and the audience.

Oh my, the word practice sounds too much like a chore, and those are never fun. I prefer to keep my guitars handy on stands so they can be picked up and played whenever a creative thought pops into my head. That helps me create spontaneous “guitar time” while having fun with lyrics and melodies. When I’m getting those guitar hours in, my goal is always creating. As long as I am creating, I get lost and forget about time. As far as practice for a show, the timing all depends on whether I have a backing band or it’s a solo show. When working with a band, practices are scheduled with enough time allotted to work on each song and refine the setlist to suit the venue.

Make music something you love to do. Writing and playing music is my therapy that provides spiritual and emotional comfort. Trust your instincts, because being your best will make you happy and help you stand out in a crowd. Breathe. Breathe and stay present while information and others spiral around you because projecting too far into the future causes chaos about things you cannot control. If you have an idea for lyrics or melody, try to get it on a voice memo or paper as quickly as possible. Thoughts and moments can be fleeting; it’s essential to capture the spontaneous thoughts/emotions. Who knows, it just might turn into a favorite song.

Chatting with Bea Stewart About “Nicest Song I’ve Ever Written,” Her Guitar, and Tone