Home Interviews Shauna Tohill of the London-based duo Rews: From London where they...

Rews, the London-based duo of vocalist/guitarist Shauna Tohill and vocalist/drummer Collette Williams, met four years ago when they were introduced by a mutual friend who attended university with Williams. The musicians scheduled a jam session and almost instantly developed their musical partnership.

“I had been writing some tunes with the concept of Rews in mind before meeting Collette,” says Tohill, “and I think when we hit the jam room, it felt exactly like she was who I had been looking for, and she says she had felt the same. I really was hit by how our energy bounced off one another. It was such a cool chemistry, and we both got lost and forgot that time existed during the jam.” 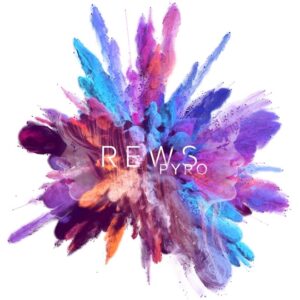 They released their debut album, Pyro, in 2017, on Marshall Records in the U.K. Earlier this year, through licensing to Eleven Seven Label Group, the album became available in the U.S. Three singles from Pyro — “Miss You In The Dark,” “Shine,” and “Your Tears” — had already been featured across radio stations in the U.K., and are now breaking through to American audiences.

In tandem with the U.S. release, Rews performed at the winter NAMM show in Anaheim, appeared at the She Rocks Awards, and crossed coasts for a showcase in New York. Since returning home, they’ve been busy with festival dates, and in February presented a master class at the Academy of Contemporary Music.

Rews have grown personally and professionally since that first jam session, says Tohill. “We’ve gotten to know each other very, very well and are still learning and adapting every day, like any partnership. We do almost everything DIY, and so that hard work shows a well-rounded version of who we are to each other. We strive to work to each other’s strengths and communicate as best we can in order to create the best music possible.”

There’s not much information available about your background. When did you begin playing guitar and writing songs?

I grew up in a musical family with a singing grandmother and mother alongside my bass/guitar/keyboard-playing dad! I started firstly with singing and songwriting, from as far back as I can remember, just writing silly songs that I’d sing to my family. I started on piano, then was mad about the bass guitar. I eventually, at the age of 13, decided I wanted to really learn how to play guitar, as it was at this point my “serious” musical journey began. I knew then I wanted to write music that would really be a positive inspiration to the world. As music was the only thing that made me feel better in my teenage years, I felt it was my responsibility to also give back in that way, and having a guitar in hand made that possible to do. Prior to moving to London, I lived in an artist residency in Cirencester where the REWS concept developed and I started writing songs specifically for it.

Had you played in many bands prior to relocating to London?

I did, yes. The first band was a metal band called Hastur, followed by Angelfall, a rock four-piece with a female drummer, and then came session work for various bands including Snow Patrol, Darwin Deez, and Basia Bulat. Most recently, though, I had my own solo project called Silhouette. It was a more alternative pop-style project and it was a lot of fun!

No doubt this is the most frequently asked question: A guitar-and-drum duo is unique. Was this a conscious decision or simply the result of not finding the right musicians for a full band?

It wasn’t a very conscious thought at first. The main focus was to find the core team — a drummer and guitarist/songwriter. We thought about adding a bassist and maybe another guitarist, but after a few experiments with triggers and going through a mountain of pedals, we realized we didn’t need to try and bring anyone else onboard. Maybe in the future, but for now, it’s easier to get around the place with only two of us.

What are some of the advantages and challenges that this presents?

Advantages are that the limitations force you to be more creative with what you have and challenges our skills to make us better all the time. It also means less people to manage, less logistical issues, and it’s fun.

Disadvantages are that there are less people to split tasks between, so we are also carrying all of the other workload — driving long drives to and from gigs, loading in and out, administrative tasks, etc. — and decisions can’t always be made by majority vote — there are only two of us.

This also puts you in the position of being lead guitarist and holding down the rhythm in the pocket with the drums. How do you make that work live, in the studio, and in songwriting?

It sure does. I started off as a bassist, and so I feel that has served me well in staying in the pocket with the drums. From a songwriting perspective, the bass and rhythm guitar are somewhat similar, and so I tend to write songs firstly with a solid base — bass, rhythm guitar, and vocals — and then we add the drums and other melodic guitar parts unless it is a riff that developed during the songwriting. When creating and playing lead parts, I try to keep them tasteful, melodic, and complementary to the song, rather than just for the sake of adding something in. The songs are written with our band in mind, ensuring that anything that is written and recorded can be played well live.

I create all of the triggers and tracks for our live set, and so during the performance, you will either hear a pre-programmed bass, which will carry the song whilst I carry out the “lead” part, or a loop that I’ve recorded on guitar first and then noodle over the top of that.

Sometimes I experiment with splitting the signal between a bass amp and lower octave pedal and guitar amp with my original guitar sound on top, but this is all dependent on the venue and amount of space we have when traveling to and doing gigs. It’s always evolving.

Pyro was originally released in 2017 but only became available to U.S. audiences this year, via your licensing deal with Eleven Seven Music. How did that deal come about, and what made Eleven Seven the right label for Rews?

It came about through our record label in the U.K., Marshall Records. They had been lobbying hard for us. We feel that Eleven Seven Music have an abundance of awesome artists under their belt, and to be alongside them creates a credibility that we feel privileged to be a part of.  They also work super-hard and have brilliant ideas, so we are excited to be on this journey with them.

You recorded at Abbey Road Studios. What was that like for you, both in terms of actual recording experience and being surrounded by the history?

It was an incredible experience, to say the least, and a dream come true! The experience, in general, was epic. You could feel the history oozing from the walls almost. The recording experience felt so surreal. We had a tour around all of the studios and got a bit of a history lesson too! The team was very professional and encouraging.

What were your gear choices for the sessions?

Generally speaking, we went through a mixture of Marshall and Fender amps. In particular, a Marshall DSL-40 and JCM 800 and Fender Blues and Twin. The aim was to ensure that we got an honest, wide spread of sounds to make the record as full as possible. We experimented with the low mids on the Marshall and the top ends on the Fender. Guitars, I used a Fender Telecaster mainly, as that is what I play, some parts we tried out on a Gibson Les Paul, and bass-wise I played a Fender P-bass and Peavey Zodiac bass. Effects-wise, I stuck to mainly my delay, RAT, Boss Overdrive, Boss DS-1, Big Muff, Boss DD-6 and Reverb pedals. We also had a look at some of the inbuilt crunch sounds on the amps.

How did working with Rob Cass help take Rews to the next level as a recording band?

He was part of the recording contract we had signed, and so it was a leap of faith. We would say there was a kind of co-production in some ways, as we knew what kind of sound we were wanted and so did he. He was very passionate about our sound and the songs that we had to share with the world. He certainly encouraged us to explore the keys the songs were in, he pushed the boundaries, and he was very keen to take the time to experiment with different sounds on the guitars and bass, as well as the layering of vocals and adding in different synth parts.

Can you walk us through the recording process for one of the tracks?

Yeah, sure. I’ll go for “Miss You In The Dark.” We did the first part of the recording together in Studio 3 in the live room. The engineer had set up two Marshall amps in a soundproof room, and Collette sat in front of me with her drum kit and was eager to let loose. We bashed it out to the tracks that we play live with. This was to capture the energy of what we do live. All without vocal takes. It was a real magical moment. Both Collette’s and my face were beaming with joy, of being in that moment, in that room, doing what we love and capturing our future debut single!

Once we got the performance we were happy with, we overdubbed the bass guitar in the control room. A few days later, over in Tileyard studios, we experimented with some additional synth textures and added any extra guitar parts that needed to go in. Finally came the vocal takes. We tried to spend a little more time on vocals, as they usually get popped on at the end. We tried to really challenge the delivery, get into the moment that inspired the song, which was all about finally feeling free from someone you were connected to but were rejected by. We had some really emotional moments and feel they were captured during the takes in this song.

Last year saw you headlining your own tour and opening for Halestorm in the U.K. This year, you performed at the winter NAMM show, and from there had dates in New York. What is ahead for Rews in 2019?

[This year] will see the writing and recording of our second album, sprinkled with various summer festivals and an autumn tour, hopefully in U.S. and U.K. Really excited! Keep your ears and eyes peeled!