S.G. Goodman released her critically acclaimed debut album Old Time Feeling, produced with Jim James of My Morning Jacket, in July. Her accomplished debut album seeks to debunk rural stereotypes while exploring mental health, living with OCD, and the notion that you can still love your family and community even though you may disagree with them.

She also released a video for the single “Space And Time” (directed by Silvia Grav) which captures the powerful emotions behind the deeply moving song, with its refrain “I never wanna leave this world, without saying I love you.” The video shares Goodman’s struggle with suicidal thoughts following her community’s reaction to her coming out as gay.

Discussing the track Goodman stated, “The idea of your home disappearing can be a universal feeling. Does it leave you or do you leave it? There are many reasons why you may feel you need to leave a place or the world. Maybe it’s from lack of acceptance from those closest to you?  Or how the thought of escaping the mental toll of existence itself becomes too heavy to ignore? When I first saw the finished product of this video, I felt that was the feeling it evoked for me. With the desire to disappear being the force behind “Space And Time” I am proud that the video shows such a beautiful place escaping me. That in itself, was where my head was at when I started writing the song.”

You have a new album, Old Time Feeling, which was released in July. What was the inspiration for the album?

This isn’t a concept album; I am strictly inviting listeners into my world as I see it.

How did you approach the songwriting for Old Time Feeling?

I guess the same way I approach all songs, which is by honoring them by letting them appear when they are ready. There are several songs on the album that took me years to write. I’m not a fast writer, and I fully believe that if you let it, a song will go about its business.

Recorded at La La Land Studio in Louisville, share with us the recording process.

The boys and I were in the studio for seven days. I brought in a buddy named Mark Sloan to be our utility guy. He allowed us to play the tracks live while I directed from the control room on many occasions. I worked with engineer, Kate Haldrup, who would stay up hours after we went to bed, tweaking and getting the session ready for the next day. It was such a whirlwind of a week; it’s honestly hard to recall.

As to your background in music, when did you start your musical journey, and when did you pick up the guitar?

I’ve been writing lyrics before I knew that was what was going on. I’ve never been able to recall song lyrics very well, so even as a child, I made up my own words to other people’s songs. As far as when did I first pick up a guitar, I believe I was around the age of fifteen.

Raised in Western Kentucky on the Mississippi River Delta in a strict church-going family of row crop farmers, how did this impact your music?

I would say that it made me connect with a place in a deeper way than most. Our whole lives centered around the farm. I’ve always liked how my father describes land—that it’s just holding the world together. In our case, it did hold our world together.

What inspired your desire to become politically involved?

Oh, you know, just the fact that I’m living and breathing. That was a good enough reason for me.

My earliest musical influences were hymns. I grew up attending church, so I basically went to a concert three times a week.

What are you listening to today?

Lastly, what do you want listeners to take away from your music?

It’s out of my control, so I don’t give much thought to that. The best I can hope for is that they will remember it. 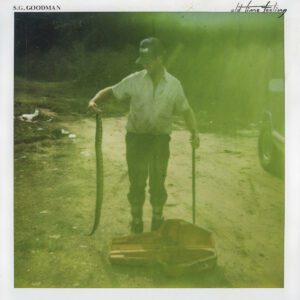 Old Time Feeling was recorded over seven days at Louisville’s iconic La La Land Studio, chosen by Goodman as it possessed three of her favorite things. “A creek, a big porch, and a kitchen” with her life long friends, Matthew David Rowan and S. Knox Montgomery, who helped create the record, providing guitars, and drums respectively. The album was mixed by Goodman, James, and Kevin Ratterman at Bo Koster’s studio in Los Angeles.