Pony (aka Kathi Hixon-Smith) of the duo Ryan and Pony started playing guitar at the age of twelve when her father bought her an acoustic guitar, and she says, “It went on from there.” Pony played bass for indie rocker Mark Mallman and met Ryan Smith while they touring the US as his back-up band. Later in separate bands, Pony with Hundred Flowers and Ryan with The Melismatics, they were making their mark in the Minneapolis music scene.

Creativity called, and Ryan and Pony was formed in 2016. They recently released their debut album Moshi Moshi, which has been described as a fusion of dream-pop, post-punk, EDM, and good old fashioned rock and roll. Ryan produced the album, which was recorded at several studios throughout the Minneapolis area, including Flight Simulator, Flowers, Master Mix, and The Kill Room.

Pony filled us in on the inspiration for the album, her background in music, and her gear of choice. 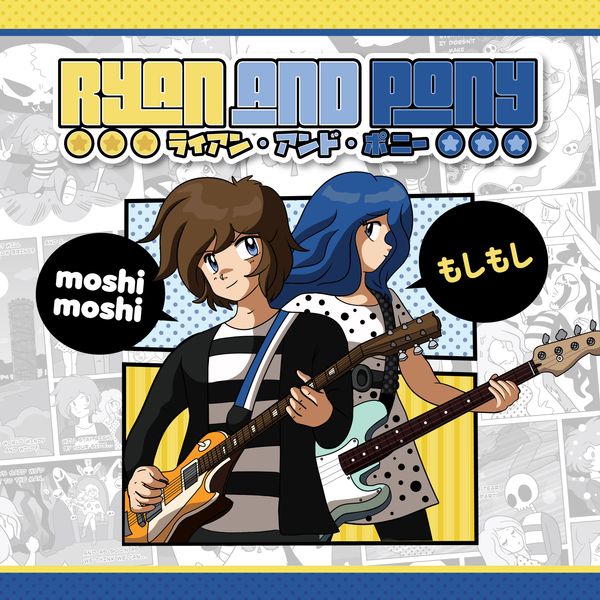 What inspired your latest album, Moshi Moshi, with your new project Ryan and Pony?

Life transitions/seasons and the growth and change that comes with that. We wanted to take a more pleasing vocal esthetic as well.

What was the songwriting process?

Ryan wrote most of the songs on the album. I helped with production and input. I laid down my bass parts and vocals. I would play around with ideas within those parameters. Ryan would A and B some ideas, and I would say what I liked better. I wrote one song on the album called Cinematic. With that song, I heard a phrase and melody together (probably when I was driving), and I found the chords to lay beneath it. I made a demo in GarageBand and asked Ryan to write a bridge. I usually like to co-write with others who have a good sense with music and are easy to work with.

The album was recorded at several studios around Minneapolis. What was the reasoning behind that decision?

Over time we had great opportunities/experiences to work with all amazing people and settings, and within that, we found ways to make this an efficient and quality process that would fit the vision. So we chose to go with who and where would make this process happen with the time we had allotted given our lifestyles. The drums were played and recorded by Peter Anderson. He would come up with his fantastic stylings for the songs and record them(not only is he a talented drummer, he is also gifted at engineering and production) wherever there was availability and time for him. Most tracks were recorded in our home by Ryan. He is very gifted at engineering and production. I watched him start from the ground up in that process, and it has been fun to see that growth. John Fields mixed the tracks. I know I am forgetting some other things as well that are worth mentioning. So please forgive me if I did.

There’s a backstory to your project Ryan and Pony where you play bass. Tell us about how the duo was formed.

Ryan and I were in a band together called The Melismatics. I played guitar, keyboards, and sang. Prior to that, I met Ryan playing bass for the solo artist Mark Mallman. We have worked together for eighteen years. The Melismatics had a much-needed hiatus from years of touring. And being the creative people that we are, we thought it made sense to keep that process going. We had always talked about having a duo, even back in 2003

How would you describe your music?

Diverse, etheric, poppy, and intelligent with some edge.

Before Ryan and Pony, you were with The Meslimatics and Hundred Flowers. How did you originally get started in music?

My father bought me an acoustic guitar when I was twelve. It went on from there. I just threw myself out there. I fell a lot, but I always get back up. Different scenarios happen in music. It is like a puzzle where you have to keep finding what clicks, and there is a growing process to it. As with any passion, you encounter some adversity (on all kinds of levels) as well as really great experiences. I needed the time to figure out that I was a front person. I initially wanted to be a session player.

In The Meslimatics, you played guitar, and you’ve also played drums. What came first—guitar, bass, or drums?

Share with us a little about your gear—instruments, pedals, strings.

I love my Fender basses—especially the tone of my Jazz Bass from 1983. I love Reverend and Gibson guitars. I play round wound bass strings; I used to use flat when I only played fingerstyle. I used to use blue steel strings. I use GHS guitar strings. 11 top, 15 bottom. I love my VOX AC15 amp for guitar because it has an open back, which is nice because I hate when my amp is on a stand ripping my head off, and then I sing sh**ty because I can’t hear my voice in the monitor. I don’t like to have my guitar in my monitors. Bass is fine in the monitor. I honestly don’t know what my bass amp is. It’s a solid-state 15 or 8×10. Probably a Crate. Sounds good to me. Easy to lug around. My sans amp is where I control my tone. If I have that, I can play through anything.

Tone is an essence that is assigned to a sound. I used to play with a less bright sound to try to create an analog/old school tone. Much like in tapes or records. I have come to appreciate the depth of brightness by adding more mid and treble to round out the tone in both my guitar and bass playing. I started to play the bass with a pick to give a more bright, carved, driving sound for rock music. I like using my fingers for ballads and or slower songs or to get more smooth precision with walking bass parts. It really all depends on what the song calls for.

Learning songs for my gigs (recording, live); that is the only time I have to practice as I am raising a child and working two jobs. For fun, I learn covers, or if I want to be challenged, I learn something I think I can’t possibly pull off on an instrument. If I get halfway, I am happy.

What musicians/vocalists influenced you the most?

Which artists are you listening to right now?

KFlay, Tame Impala, the Who, and Run the Jewels.

I know a lot people hate the song “Safety Dance.” I still like that song and always have liked that song. It is the only song I like from Men Without Hats.

Any advice for young female artists just getting started?

Don’t put all your worth in the measurement of how successful you are. Do music because you love to do it. Don’t succumb to or be a part of female bullying or any bullying. If you experience bullying, have a pat phrase ready so you have the opportunity to take your power back and remain professional. You can say something like, “That doesn’t work for me.” Or “Thank you for being transparent; after some careful consideration, I will make a decision.” Find ways to genuinely uplift and support others—you will see a return investment. Don’t compare yourself to others—rather be inspired. Maintain positive self-talk and acknowledge areas where you may need to grow. Find ways to make what you want to happen, happen in steps. Don’t get discouraged if things fall through. Just move on to the next thing.

I am gonna co-write write some songs for music licensing projects pretty soon. I would like to get back into more writing in general. I don’t really do it as much as I should or used to. My daughter has really cool song ideas I would like to help her in that process. I would like to grow in the areas of audio production and engineering as well.