Plush is a new all-female rock band from New York, with members all below the age of twenty-one. Don’t let their ages fool you—they are a group on a mission to take an all-female rock band to the forefront of the genre. Plush consists of Moriah Formica on vocals and guitar, Brooke Colucci on drums, Ashley Suppa on bass, and lead guitarist, Bella Perron.
The band’s frontwoman, Moriah Formica, was a contestant at NBC’s hit reality show, The Voice, during Season 13 when she was sixteen. Moriah is remembered as the girl who got all four judges to turn their chairs with her stunning cover of Heart’s “Crazy On You.” The judges of the competition, Miley Cyrus and Adam Levine, openly expressed their fascination and expectations with Moriah joining Team Miley.

During the pandemic, Moriah has been busy on social media taking cover requests from fans and releasing those covers on her platforms. Several of them have received millions of views. One of those covers was “Barracuda” by Heart, performed on social media by Moriah and drummer Brooke Colucci. That performance garnered 7M views across both of their social media platforms. That left Moriah with the desire to create an all-female rock band. “I’ve always, always wanted to be a part of a band, not just Moriah Formica or the Moriah Formica band. I wanted to be a part of a cohesive band where we all work together. And boom, the idea of an all-female band came up,” says Moriah. “I just started going after it. I had met Brooke, our drummer, through Instagram and found out that she only lived like forty minutes away from me, and I was like, ‘Well if that isn’t fate, I don’t know what is.’ The two of us had jammed a little bit and were ready to find some other players.”
They added a friend of Brooke’s, Ashley Suppa—who has been dubbed the “female version of Cliff Burton”—as their bass player. Moriah shared, “We had a little jam session together—me, Brooke and Ashley, at Brooke’s house, and it just felt right. I couldn’t believe it. It just felt so perfect.”

So, a lead guitar player was all that was needed. Moriah’s management company, Surface Management, placed an ad on social media. As fate would have it, one of Moriah’s biggest influences and supporters, Lzzy Hale of Halestorm, saw the ad and reposted it on her platforms.

That post caught the eye of Berklee College of Music freshman Bella Perron. Bella shared her experience. “That’s how I found out about them, actually. I saw it on her [Lzzy Hale’s] Instagram. I’ve been a huge fan of Halestorm since I was like ten. When I saw it, I thought there’s nothing to lose from at least just reaching out and sending my information and an audition video. And it all just worked out.”

Bella has a passion for rock. Coming from a family with a musical background. Her father plays guitar and owns a music shop. She began playing the guitar when she was five years old. “When my dad got me into bands like the Beatles, Led Zeppelin, Kiss, and Black Sabbath, I was just hooked on guitar. Like I thought, Ace Frehley really was the absolute coolest. I’d watch their concert videos and say, ‘that’s what I want to do.’” She recalls her first guitar, “My first guitar was a Squier Bullet Strat. It was bright pink—the Hello Kitty model.”

Together, these four young and talented musicians formed Plush. Despite the soft and cutesy name, don’t think for a moment that these young, talented women aren’t serious. Fusing the sounds of rock bands like Aerosmith, Evanescence, and Halestorm, they released their first single, “Hate,” which is garnering rave reviews and airplay—most recently, SiriusXM Octane added the single to their playlist. The song has also gotten spins from iconic stations like 955KLOS and 95 WIIL Rock.

Moriah describes the band’s new single as “pretty heavy-hitting. It’s not like metal, but it is. It’s just straight-up rock and roll. I guess that’s a good way to describe it. It was inspired by a person that I really, really cared for and loved. Then they betray you in the worst way; it’s really what it is—typical heartbreak and all the emotions and all the hate and pain that comes with it. At the same time, you want to hate that person, but you love them. And that’s what you hate.”

When it comes to songwriting for the band, Bella shared, “Usually, Moriah comes up with a song idea, she’ll send it out, and we’ll practice with it. We’ll learn the parts or make our own adjustments, and then when we do get together about once a month, it’s like we’re all prepared.” Moriah filled in, “For me, I may have a riff pop up in my head, or maybe I’ll start writing like a verse and a chorus or whatever. Then, I show the other bandmates some ideas and say, ‘Hey, what do you think of this?’ We kind of just kind of go from there.”
Speaking of guitar riffs, Bella has a few that inspired her. “I feel like there’s a lot of those moments. I mean, I still get them. But one of the first ones was “Shock Me” by Kiss. There’s a lot of blues licks, but it’s also super melodic. And I remember my dad telling me once that it’s one of their best solos because everyone can sing it too. Another big one for me, too, was the first time I listened to Joe Satriani’s Surfing with the Alien record—actually, the title track because I hadn’t really listened to a lot of instrumental stuff yet. That was another one my dad got me into. I just thought it was so cool how not a single word has been said—a forty-minute album, and it’s all this guitar. You feel like you’ve been on a whole journey.” 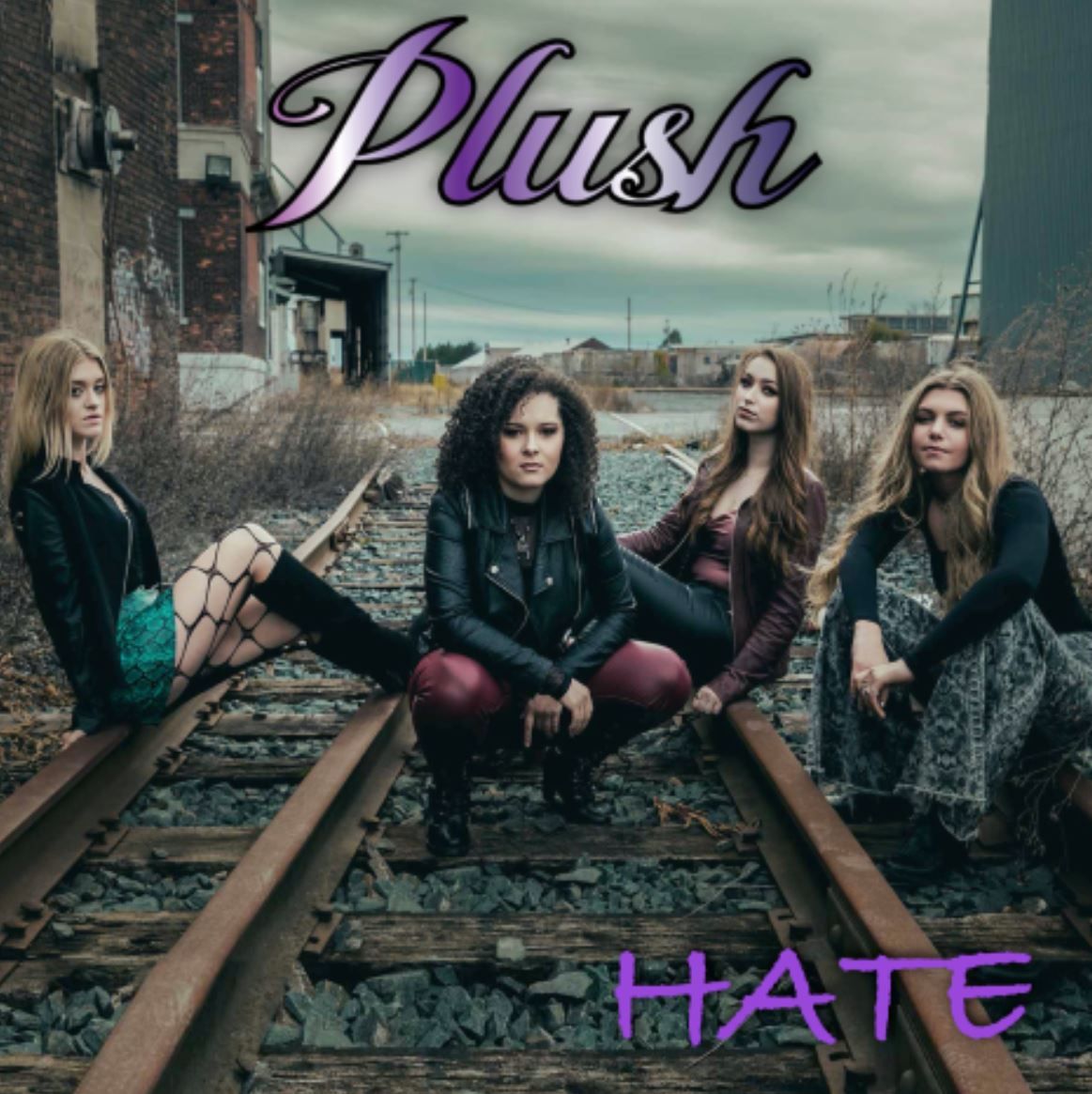 Like all aspiring musicians, the Plush members have their female role models they look up to for inspiration and hope. For instance, Moriah names American rocker Lzzy Hale from the hard rock band Halestorm and Amy Lee of Evanescence. She also loves Nita Strauss, Joan Jett, and Lita Ford.

“Lzzy Hale, I love her. She’s amazing. I really, really love Nita Strauss, too. I’m not going to lie—I mean, she’s just ridiculous; she just looks so powerful when she plays too—you look at her, and there’s like some sort of power. It’s like, ‘Wow, I want to be that.’ I really love Joan Jett too. I always just really, really respected that she always had her guitar with her. And honestly, Lita Ford too because I would see her ‘80s pop-up videos, and I thought she was so badass and so cool.”

Just like Moriah, Bella also sought inspiration from Lita Ford and Nita Strauss.
“Growing up, the whole female aspect wasn’t even something I really thought much of until I was probably twelve. It was like, ‘Wait a second, I don’t know any other girls that play guitar, at least in my community.’ But then, when I was around 12 years old, I saw Nita Strauss live. She blew my mind. Alice Cooper was opening up for Mötley Crüe, and I was right towards the stage. Just seeing a woman that’s empowered and just badass going for it—an insanely talented player on a stage full of guys. It was just cool, and it’s awesome. So, she’s definitely been like my main female influence. Also, Lzzy Hale too. I actually saw Lita Ford once opening up for Halestorm. And it was another show that just like blew my mind; they’re both so powerful.”

When it comes to gear, Moriah plays and is endorsed by ESP Guitars. “I just love them. I honestly won’t play anything else. I just think that they’re beautiful and they sound great. I love that they’re compact—not all of them, but the ones that I play. I love their size. It’s perfect because I’m a small girl, so it’s super, super refreshing to have a light, smaller guitar, especially as a lead singer.”

For Bella, it’s Ibanez. “It’s my go-to. It’s special to me because it’s not really an Ibanez model. It was my dad’s Prestige back from the ‘90s. It’s special to me because it’s been through so many modifications that it’s not really a specific model” Being a huge Steve Vai fan, he put the body with the monkey grip on, and then he stopped playing. So I took it and put some DiMarzio pickups along with a new pickguard on it, so it would all be white. And then my other one is my blue RG as well—which feels super comfortable for me. I have small hands, so I love the super thin necks; they are really fast and comfortable to play on. And I also have a Washburn Nuno Bettencourt model, the N1, and an Epiphone Les Paul. But I’d say the past two years, Ibanez has kind of been my main tool.”

Plush wants people to be able to connect to their music. They want their songs to resonate in people’s minds. Moriah shared, “Honestly, my dream has always been to help people. I want to give them something to resonate with. When I first heard a song that could put exactly how I was feeling into words, that was life-changing for me, and it still is.” As someone who has struggled with mental health issues, she understands. She went on to tell us, “I’ve struggled with mental health my whole entire life, and it’s a daily struggle, and it’s going to be there for the rest of my life. But sometimes, knowing that you have somebody who understands is enough to keep going and stay alive. So, I hope to be that—that’s one of the many things that I hope to do for people with this band. And with the help from the other girls, it’ll just be huge.”

And to all the aspiring young female musicians out there, Plush says to be able to take constructive criticism. Also, “follow your gut” and “go for an opportunity,” no matter how cliché it may sound.

By Tara Low and Cece Gair