Nikki O’Neill’s musical diversity might be a consequence of her upbringing: born in Los Angeles, she moved to Sweden when her Polish mother remarried and grew up in a tri-lingual household in Stockholm. “Nobody in my family played instruments,” she says. “But our record player always went on heavy rotation with my mom’s collection of Al Green, Dinah Washington, and Polish cabaret and pop songs from the ’30s and ’60s.”

O’Neill’s much-anticipated album, World Is Waiting, dropped today via Blackbird Record Label, and she filled us in on the new album, her background in music, and more.

What inspired your latest album, World Is Waiting?

I was lucky to have a band with a great musical chemistry, so I wanted to make sure we captured that on tape. The title track is about turning the chapter on 400 years of racism and exploitation in America so we can finally start embracing other values—that’s something that’s on my mind a lot. There’s also a gospel song, “A Place at the Table,” that was written after Aretha Franklin passed away. The musicians and guests on the album come from the Americana and jam band scenes in Los Angeles. It was fun to bring those worlds together—I love doing things like that.

What was the songwriting process?

I cowrite most of my songs with Paul Menser: I write the music, and he writes the lyrics. Since I’m in LA and he’s in Idaho, we email each other a lot of lyric ideas and voice recordings of me singing and playing acoustic guitar. We often start with the song title just to focus our writing, but I experiment with other approaches too because I don’t want to get formulaic. The title track, for instance, was inspired by me pulling out a drum machine pedal and playing a blues guitar riff over it in a contrasting rhythm. There are two songs that I wrote myself. My lyric writing style is probably quirkier than Paul’s, but I wanted to feature some different perspectives on the album. When it comes to music, I like writing with different rhythmic feels that I haven’t done before—it makes the albums and live shows more interesting.

Did you record the entire album in Memphis, or just specific songs? Tell us about the recording process.

The music of the opening track, “That’s How You Lose Her,” is actually based on a video submission that we did for NPR’s Tiny Desk Contest. The closing song, “Take Back What I Said,” was recorded at Royal Studios in Memphis. It’s just me singing and playing acoustic guitar—a complete contrast to the big, high-energy opener. The rest of the songs were recorded at my coproducer Joshua “Cartier” Cutsinger’s studio in LA, with me and my band—Rich Lackowski, Rob Fresco, and Joshua Pessar—playing the bed tracks live. We sat together and played in one room; the only overdubs are the keyboards, backing vocals, lead vocals, and my lead guitar. I was also really adamant about getting a great mix. I wanted the album to sound warm and give you a feeling as if the musicians were right next to you playing. So Ethan Allen (Mavis Staples) mixed it and Gavin Lurssen (Robert Plant & Allison Krause) did the mastering.

You also brought in guest artists. How did you form the collaboration with these artists?

Doug (Organ) auditioned on keys for the band, and his first collaboration with us was recording this album. I’ve known Halina (Janusz) and Lisa (Malsberger) for years; they’re singers in Jerry’s Middle Finger, a Jerry Garcia tribute that tours a lot on the West Coast. Jon (Gold), who plays Hammond on the first track, is also from JMF. What’s funny is that everybody in my band except me has either been a Deadhead or plays in various Dead-related side projects. Manda (Mosher) and Deb (Morrison-Littell) are very active on the LA Americana scene as artists and as event producers. They’ve created showcases for the California Country Show at the last two AMERICANAFEST events in Nashville. I initially connected with both of them through social media, and then I played a couple of shows with them and helped them out a bit with the showcases I mentioned. Deb is also a great portrait photographer, and she ended up taking the album photos while Manda runs Blackbird Record Label, and she recently invited me to join the artist roster.

This album is a bit like a sonic tapestry of rhythm and blues, Americana, gospel, and twangy blues. With the lyrics, I’d say that some of them are deep, while others are more lighthearted and fun. I hope listeners will enjoy the journey, variety, and contrasts in a music market that seems so focused on defining artists and their “brands” very narrowly. I also hope that they’ll dig the vibe of real musicians creating a twangy, soulful chemistry together in one room, reacting to each other in real-time.

You have a vast musical background. Can you fill us in on the backstory?

I’ve always identified with being a songwriter more than anything. I’m born in LA, but my mom is Polish, and she remarried with a man from Sweden, so I grew up in Stockholm in a tri-lingual, multicultural household listening to lots of different music. Nobody played instruments, but my mom loved playing records, and her favorites were Al Green, Santana, and Dinah Washington. Those artists really influenced me, but when I got into my teens, I also loved hard rock and classic rock, and I started playing guitar at age sixteen. I attended a high school music program that focused on jazz and classical music. There, I fell in love with the colorful chords of jazz. Eventually, I moved to New York City, where I ended up playing rhythm guitar in different r&b, afrobeat, reggae, and blues bands. Gradually as I got more confident, I added singing and then lead guitar to my role. So my formative years were really eclectic. In the last eight or so years, it’s been more focused on soul-influenced Americana. I’ve been a solo artist since 2016.

Truefire.com now has a channel dedicated to you called Nikki O’Neill’s Twang, Soul & Rock ‘n’ Roll. Can you tell us about that endeavor?

Sure! Last year, blues guitarist Sue Foley encouraged me to do lessons online since I had written a book (Women’s Road to Rock Guitar on Alfred Music) and done a couple of popular lesson videos on YouTube. I contacted TrueFire and they liked my concept and teaching experience. Twang, Soul & Rock’ n’ Roll is for intermediate and beginning players who are into Americana and rhythm and blues guitar. It costs $5/month to subscribe. I post a new lesson every two weeks, and I’ve got over 100 lessons up there now. The intermediate ones cover things like double-stops, rhythm guitar and soloing with triads, and blending major and minor pentatonic sounds. Those lessons are all about developing your ability to make a song’s arrangement exciting and interesting. I also have beginner series in R&B, rock rhythm, and lead guitar, where the lessons are in progressive order. If you can play a 4-string F chord, you’ll be fine.

What’s your go-to guitar for songwriting?

What musician has had the biggest impact on your style of music?

Which artists are you listening to right now?

Eddie Van Halen. My style of lead playing is much more basic, but I always was fascinated by his way of hearing music and melodies. He’s the only shredder I like because he could write fantastic songs, his rhythm playing and sense of pocket was incredible, his ideas were so creative, and he always looked really happy when he played.

I was a huge KISS fan in my teens, and I still have a soft spot for their first three studio albums. I love the hooks, the backing vocals, and Paul Stanley’s voice.

What three things can’t you live without?

My husband Rich, my Telecaster, and some mode of transportation, because I live for road trips and traveling. 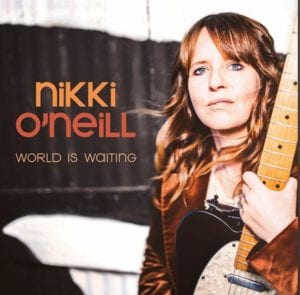