Known for her smooth but powerful vocals and rich storytelling, folk singer-songwriter Amy Speace released her ninth album, Me And The Ghost Of Charlemagne, in September of 2019, an album marked by honest reflection, rich tapestries of detail, and soft contemplation. Following the release, Speace joined fellow musicians at AMERICANAFEST 2019 and chronicled her experience as a touring musician with her young son accompanying her.

We caught up with Speace after her time at AMERICANAFEST to talk about navigating life as a musician and motherhood, the inspiration behind her album, and her guitars.

So you did kind of a photo essay about playing AMERICANAFEST as a new mom and juggling the expectations of an artist with caring for a baby. What was the key lesson that you learned through all of that?

Through a lot, through having a baby, through trying to keep a baby as a mom, kind of juggling it all, I mean, it’s not as hard as I thought it was gonna be. When I was pregnant and thinking about how my life had been for the previous 20 years, which was like being on the road 150 dates a year to make my living and to promote records and to do things that I do, I partly just thought, “Oh, there’s just no way I can do it this way once I have a kid.”

I know people to do it, but their partners are in their band or also musicians, or they have a lot of money and they’re able to get a nanny all the time. So I definitely had to change my primary focus. My primary focus before having my baby was me, and now my primary focus is my son. It’s a juggling act, but it’s not that hard. I just try to work. I rely on some help, like I have a nanny, and we have my parents-in-law live close enough that I can ask them favors.

And I’m not doing 150 dates anymore. I’m 51 now and I didn’t really want to tour like that anymore anyway. I wanted to be home more and kind of create more of a balance. And so it’s kind of perfect timing, because I was ready to, not slow down, but just choose more wisely.

So that’s my lesson, it can be done. It takes a village.

And your son was at AMERICANAFEST, right? What were his reactions to seeing you on stage?

I guess every time he heard my voice, he went, “My, my, my, my, my, my, my Mom!” He got all excited. I keep expecting when he’s watching me on stage to kind of put his arms up and cry for me because I can’t get to him. But he hasn’t done that. He seems to understand that when Mom is behind the microphone, mom is working. So, yes, I don’t know if he understands that, but maybe I’m just putting that out. But it’s kind of fun to think that he gets it. He’s like, yeah, that’s what mommy does.

For you, how was the AMERICANAFEST experience?

That was good. I used to do way more of it, you know, kind of being able to go out and hear friends who playing or go out and hear some of the newer acts that I’ve never heard of. I can’t I just can’t do late nights anymore because I’m up at 5:30 a.m. So pretty much any night that I can be in my sweatpants at 8:30 p.m. watching Netflix is a really good night for me. So when I did play my showcases at 11:00 p.m., that was really challenging. That took a lot of coffee because usually, I’m very much asleep by that point.

But what’s nice about having Huck is that a lot of times these conferences and festivals, they’re so much fun because everybody is in town to play. So it’s kind of like a reunion, and at the same time it’s a business conference. As an artist, that’s a lot of networking stress, and networking takes a huge amount of energy. It needs that kind of energy where you can get enough confidence to go to people and talk to them, people who may intimidate you at the same time. It’s nice to be honest, to have an excuse to step out of that a little bit. I’m going to show up with my son strapped to my chest with a baby carrier, I’ll probably have spit up in my hair, and I’m wearing comfy shoes. That’s pretty much what you’re going to get. And so it’s kind of been a freeing thing to just show up as a mom/artist. 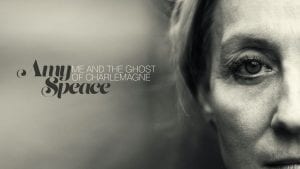 Now about your new album, Me And The Ghost Of Charlemagne, I read that you wrote part of the album for Huck, your son, but also for yourself.

Yeah, I wrote a lot of it before he was even an idea, and then I recorded it while I was pregnant with him. So definitely even songs that I hadn’t written with him in mind took on a different meaning when I was singing them and realized that I’m about to be a mother. So it definitely changed the whole record, which is kind of about the truth, about dreaming and dreams and dreamers, rather than it being just like, hey, look, it’s a beautiful rainbow out there. Sometimes you don’t get to the end of the rainbow. And sometimes at the end of the rainbow, there isn’t a pot of gold or the pot of gold isn’t actually what you wanted when you got there. And I had that idea before. These songs all point to that, that question of what is it to have that and then what is it to not get it, or what is it to get it and then not want it.

And then I was pregnant and I was already in that mindset. So it really took on a deeper level of meaning as I recorded the album in anticipation of the complete unknown of motherhood.

What do you think listeners will get from the album?

I don’t know. I hope they put themselves in the songs, and they see it’s just one big human soup of longing and desire. That sometimes resignation and sometimes finding out that the middle way is actually a really nice way.

So with that, I have to ask, why the focus on Charlemagne?

I was touring in Germany and I was staying in this town in Germany called Aachen, which is where Charlemagne was born and died. I was playing a concert and everybody kept saying that I have to go to the cathedral. That’s where his bones are interred. But it was one of those tours where I didn’t have time to be a tourist.

Then that night I was staying in an attic apartment and the bells of the cathedral tolled all night long and kept me up. And I just started writing. The whole first line of the song sort of spilled out of me that night. It was kind of like transcribing how I was feeling, which is “I’m really tired and this is not as good as it seems!”

And then as I continued to write this song, it was like, yes, but it is just not what I thought it was. So that’s why Charlemagne — talk about a grand dreamer. We know his name and we’re not quite sure why. He attempted all of these things, then he didn’t accomplish them. But we still know his name. So that attempt is still worth it.

That, I think, is the point of the record, is that despite the fact that you might not get what you thought you wanted, the pursuit of the dream is still absolutely worth it. You don’t really know the end of the story. It’s not up to you.

When touring, what type of guitar do you usually tour with?

Which do you prefer?

They’re both very, very different and I love both of them. To be honest, I fly with the Collings because it’s a new guitar and the 1956 Gibson I’m a little wary of flying with. When I drive, I drive with a Gibson.

And last question, what advice would you give to aspiring musicians just starting out in their career?