After catching a couple of Jessica Lynn’s shows at Winter NAMM 2018 in Anaheim, California, I was a fast fan. Seeing her work so hard performing all over the convention, checking in with the manufacturers she is endorsed by, taking time for autographs and photos with fans, while never losing her electrified spark, smile, and personality, made me want to know more about her! I was able to catch this rising star for a chat at the same time she was releasing a single, a video, and had just returned to the States from a successful European tour.
Jessica, you are always so busy working hard: writing, recording, touring, and promoting your music! What prompts you to write a new song?

Do you get your ideas lyrically first, or do you find a riff on the guitar or a drumbeat or a melodic idea first? Please tell us a little about your process of writing your music. Real life is definitely what prompts me to write new music. I find inspiration in little things that people say or do while I’m out at the grocery store or working out at the gym, or that I overhear in a conversation. Usually, when I write, it comes to me very fast, and I hear the entire song completed in my head as it’s going. So, the melody or the chords don’t usually come separately, but as one. I’ve written songs in this way in as little as 20 or so minutes. I’ve also dreamt of songs many times and woken up with them almost completed in my head. Songwriting has always come very naturally to me, and it’s when I feel most “in the moment” in life. 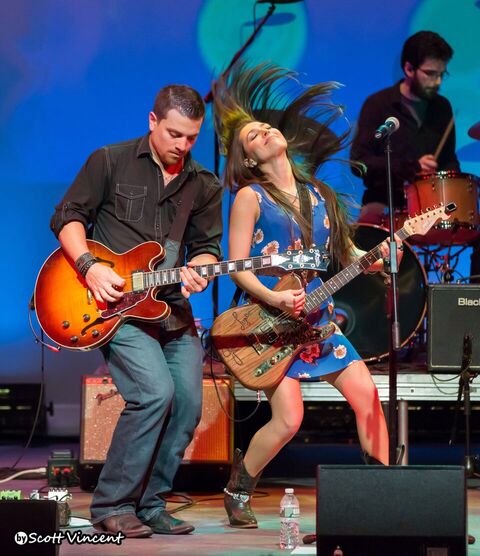 It can be very difficult to allow oneself to be vulnerable when writing songs, so do you prefer writing alone or with other songwriters? How do you think you write the best material?

This is a tricky question to answer because there are many pros and cons to both ways of writing. I really enjoy co-writing with other people because they bring things to the table that you would never think of. Or, maybe they will strum a chord or a riff that prompts you to think of an entirely new melody that you wouldn’t have thought of otherwise. However, writing alone can be somewhat of a very emotional experience and also a very freeing experience from things you may be going through that you may want to put to music in your own special way. I really enjoy doing both, but I am definitely pushed more as a writer when I collaborate with other people, which is so much fun for me. 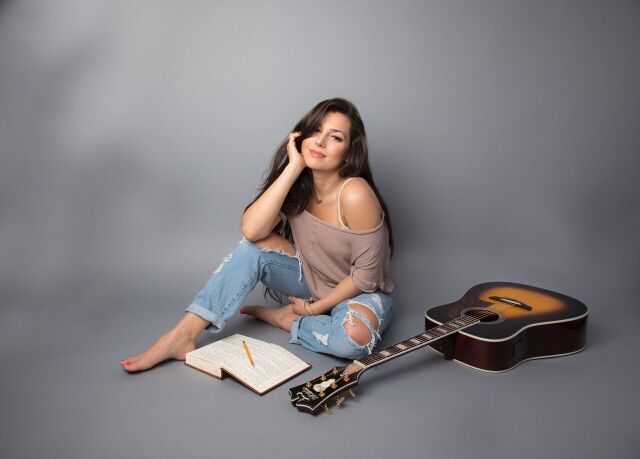 You play guitar, keyboards, and drums? What advice could you give some of our budding musicians here at Guitar Girl Magazine? Suggest what you think your best way is for someone to get started.

I started with classical piano lessons, which gave me a really good foundation of theory and then moved to the other instruments on my own. My dad showed me my first few chords on the guitar, and then I just played along to my favorite records using internet tabs. I learned drums by playing along to the American Idiot album by Green Day.

My BEST advice would be to play out as MUCH as you can. There is a big, big difference between playing home in your bedroom and out in front of an audience. When I first started, I took every gig I could from coffee shops to nursing homes. It really shapes who you are and develops you into a performer and not just a musician. If I could recommend one thing to do, that would be it!

What guitars do you use for live shows? Songwriting? Travel? What other gear do you have that you love?

My absolute favorite guitars that I always use live are my D’Angelico guitars. I have been playing them almost exclusively for almost five years now, and I am just in love with the company and the people that run it.

Also, I’ve been a Line 6 user for years. I’ve always used their wireless gear in my live rig and have recently added their incredible digital wireless microphone and a Helix unit to my setup! The Helix has been an absolute lifesaver live since no matter where I am or what I’m playing through, I always have my guitar sounds, and their microphone is the best sounding wireless I’ve ever sung on. 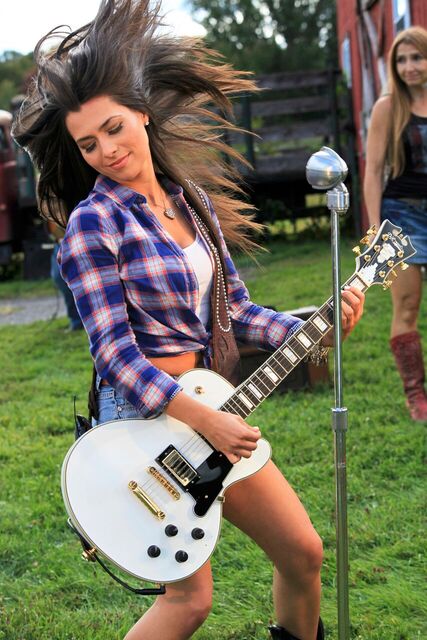 Let’s chat about your new tune, “Let’s Don’t,” that dropped on June 25 while you were on tour in Europe. Who composed the song? Did you have “staying home with your loved one” in mind when you started to write it? How are your fans responding to it? (This fan LOVES IT!)

Thank you so much! I am very excited about this song. I co-wrote it with two amazing writers and producers in Nashville: Clay Mills, who is a ten-time ASCAP award-winning songwriter/producer, and Joey Ebach, who is an insanely talented songwriter. I came into the writing room wanting to write about how when you have the right love, even when you have nothing at all, you have everything. My husband is also my lead guitarist, and we have been together eight years, and we are the best of friends. This one’s for him!

Your “Crazy Idea” and “Not Your Woman” videos are so much fun to watch because of the great tunes, your high energy, interacting with your band plus seeing how the camera loves you! Your new video for “Let’s Don’t” released August 7 stars you and your husband, Steve, for whom, and about, you wrote the song! How difficult was it to shoot a real-life story with your real-life partner in front of a video film crew?

Thank you so much. This was by far the easiest music video I’ve ever made! Being that the music video is totally our real life made it so natural! We had a really good time letting an audience into all the dorky things that we do at home. Every activity featured in the video is honestly showing my fans what we are like together, so I’m super excited about this video.

You just returned from a fantastic tour all over Europe! Is it different to perform country music in Europe versus here in the States, since country music originated here?

Europe was amazing. This summer was my best tour yet, and I came home feeling so blessed that I get to travel the world playing my original music. It has really been a dream come true. It is definitely different performing country music in Europe than here in the States. They tend to like either really traditional country there or the more rock ‘n’ roll side of country, which we do in our live show, so it works! The bro-country style that is very popular here in the States is almost nonexistent in mainland Europe. The audiences there are spectacular, however, and we have such a wonderful time performing for such appreciative crowds who just love live music.

Tell us one of your fun stories from this last tour.

There are so many! It’s hard to pick! Being there for two months, every day was an adventure. One of my favorite moments from the trip happened while walking around Disneyland. The day before we performed at the park, we went just to be tourists and go on all the rides and have fun. We were walking around, and my husband starts yelling, “Oh my God! That’s ‘Crazy Idea!’ ‘Crazy Idea’ is playing!” I couldn’t believe it. It was such a special feeling, standing there with my family, hearing my song pumped throughout the Disneyland park. I’ve been an avid Disney fan my entire life, and that was such a cool moment that I’ll never forget.

With the supposed demise of CD sales, how will you continue to write, record, and sell your material? Do you have any plans for a full-length “record,” or is that now seemingly obsolete?

Now, unfortunately, everything is digital! I always thought there was something really special about holding a CD in your hands, reading the notes inside, and looking at the photos. We do sell many hard copies of my
music at my live performances, but for the most part, everything is downloads. I would love to record a full-length album, but the way the business is today it makes more sense to keep releasing singles. I hope that I have the opportunity to do it soon.

You recently sang the national anthem for the “AAA 400 Drive for Autism” Monster Energy NASCAR Cup Series race, a huge televised event. What is next on the horizon for Jessica Lynn?

That was a really cool moment in my life. The people at the Dover International Speedway and at NASCAR were so incredibly nice, and it was an experience I’ll never forget. I am a big supporter of our troops and veterans, and it was an honor to perform the anthem on national television for such a patriotic organization.

Being that we just returned home from Europe, we are now planning our USA tour dates for this upcoming year, and I will be doing a lot of writing. The best thing about this business is that you never know what’s just around the corner. 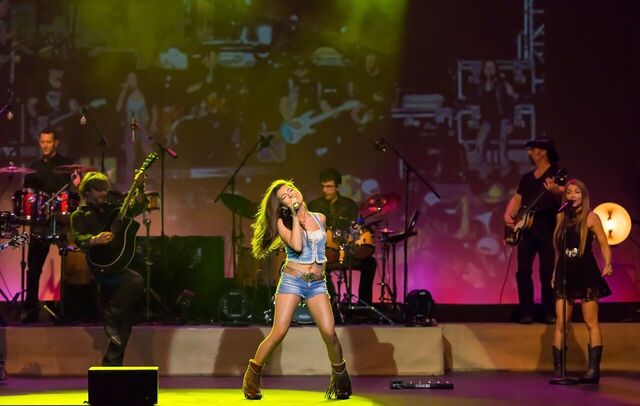