We were thrilled when “Mama Jan” Smith agreed to catch up with Guitar Girl Magazine to fill us in on her background in music and give us her take on the music industry. Grammy-nominated, Georiga Music Hall of Fame inductee, vocal coach-producer-instructor, Jan Smith, has a roster of A-List artists that would turn heads — Ciara, Sugarland, TLC, The Band Perry, Rob Thomas, Usher, and Justin Bieber, to name a few. From her Atlanta-based studio, Jan Smith Studios, she has worked with over 10,000 musicians.

While her no-nonsense, tough-love approach to working with musicians has made her a highly sought after expert in the industry, she is pure-hearted, spiritual, and humbly refers to herself as someone who helps others, but her guidance parts the dark clouds and calms stormy waters.

More importantly, she is one of us — a performer, someone who knows the peaks and valleys of the music industry business, and she understands. She grew up with music — making it and singing it is part of her genetic makeup. It was only later that she came to recognize her God-given special gift — to shine — to shine like a supernova to bring music alive to show its beauty, strength, and compassion. To bestow upon the world gems of what could be, and later, to show others the “Mama Jan” way.

In a recent Instagram post, Jan offers up this advice: “Your music is a business, not a hobby!! Treat it as such. The more you learn about the business of music, the better you’re going to be at doing your music.”

Treat it as such. The more you learn about the business of music, the better you’re going to be at doing your music. #mamajan #jansmithstudios #musicmonday #musicbiz #music #business #advice #atlantamusic #singer #songwriter

“Doing what I do to help change the world.”

You got your start early in music, releasing your first album when you were 15. What was it like when you were first starting out?

I never really thought much about the fact that I was “first starting out” . . . music was just something I did naturally from before I could talk until now. While things were certainly different then and not every 15-year old kid was a singer-songwriter, it had always been my “normal,” so recording was just the next natural thing to do in that progression of being an artist. I will say this, being musically-gifted as a kid presented its own challenges, especially during adolescence, when teenagers are trying to belong. I didn’t fit in very well because I was pretty different. Fast forward to today, I am sought after because I’m different, so God always brings things around full circle. You gotta love that! 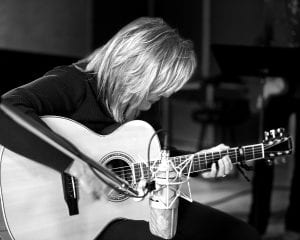 Was there a turning point when you realized that you had a special talent?

There again, I really never thought about it because I was normal to me. I did recognize as a kid that I heard things that other people just didn’t hear — harmonies and arrangements and natural chord progressions that I could play on piano and guitar without ever having been taught. As I grew up, it became very apparent that I’d been given a little something-something extra in the music department of my brain.

You have many titles — singer, songwriter, producer, vocal coach, actress, author, and entrepreneur, to name a few. How do you see yourself?

Honestly? All of that. Well, I guess it took me a minute to wrap my head around being an entrepreneur, and I don’t know where “actress” got thrown in there! Mostly, I think of myself as blessed to be able to do what I do and help others to excel at what they do. It’s the coolest thing on the planet!

What are some of your proudest achievements?

Professionally I guess being inducted into the GA Music Hall of Fame would be up there and receiving a Grammy nomination as a producer in association with a song I produced on Justin Bieber, who I’m also very proud of working with. There are many, many moments in time where I’ve been like the female version of Forrest Gump and have experienced WAY cool things like being backstage at the Grammys more than once working with clients who are performing, or flying all over the world with different artists while doing vocal support for their tours, etc. It’s kinda crazy, really. It’s all pretty hard to describe, but it’s my life, and at the end of the day, what matters most to me is being able to make a difference to others.

“It was a very surreal experience.”

How did you come to be known as Mama Jan?

John Hopkins (Zac Brown Band) would be quick to tell you that he and another client were the first two to coin calling me “Mama.” Around that same time, a young Usher Raymond became my client and probably had the most significant bearing on the public beginning to know me as Mama Jan. Between Usher and Rob Thomas, the nickname stuck industry-wide, and then Justin Beiber’s “Never Say Never” movie just drove it home.

How did Jan Smith Studios come to be?

I started doing vocal coaching on the side about 33 years ago. It was a fluke sort of thing how it all happened, but the truth is, God was rolling out my future, and I didn’t know it. I was asked by a guy who owned a rock guitar school if I thought I could help one of his students who was losing his voice. I said yes, and the rest, as they say, is history. Nobody was really catering to the needs of secular vocalists back then, and I became the first girl on the block who became known for doing that. It started with one student and has grown to serve the largest roster of charting artists of any vocal coaching business in America, if not the world.

What’s a “normal” day like for you, and do you ever get any quiet time?

No such thing as a normal day. My life and schedule can change with a phone call. Truth is, I have my day-to-day with scheduled clients and studio production that ebbs and flows with demand, but all of that is subject to my touring artists and those vocal 911 calls that come in needing my trouble-shooting skills to save whatever the moment is. Believe it or not, quiet time for me is sitting on my riding mower and cutting grass at home. It’s how I spend time alone talking to God. There’s nothing like the solace of that.

What are things people are surprised to find out about you?

You know, I get asked that a lot and I honestly don’t know because I’m me! One of the funnier things to me is when people in the industry who’ve always known me as “Mama Jan the vocal coach,” actually find out that I was (and am) an artist. I guess I would think it to be more of a natural progression, but most of the music business types seem to think that I went to school to be a music educator. My formal degree is in Psychology with a secondary degree in English Comp and Literature — a far cry from anything music-related (except for writing). As for what other people would be surprised to know about me, you’d really have to ask them.

For you, as a performer, what have been some of your most memorable performances?

Performing at the close of my induction ceremony and having Usher walk out to sing “GA On My Mind” with me was probably a highlight! Playing Chastain Park, the Cotton Club, and Eddie’s Attic (still) . . . rooms that have history and meaning to me are probably my fave memories. But some of the most fun I ever had was when we (my band) would do “DIVA” shows with Francine Reed and we’d bring the house down with some of the greatest shows ever!

What are you currently excited about?

I’d have to say the expansion of artist development and some of the great talent that we’re about to launch out of the studio. Nothing more exciting than watching artists you’ve worked with and help to develop get their shot and become successful. It shines a light on everyone!

How did you feel when you were inducted into the Georgia Music Hall of Fame?

You know, it was a very surreal experience because Mother’s Finest, a band I have loved forever, was inducted the same night. Alex Cooley was there, who gave me more than one leg up as a young rock singer, and then there was Justin Bieber, Usher, and Scooter Braun, who all flew in to do the honors for me. The more important thing, however, was having that night for my family, especially my Mom. We lost my Dad in June of 2010 just before I left out on the Bieber tour. So, having my entire family on the red carpet with me was a precious thing, indeed.

You’ve worked with an impressive group of A-List performers, including Ciara, Sugarland, TLC, The Band Perry, Rob Thomas, Usher, and Justin Bieber. Do you change your approach when working with them?

Everything we do at Jan Smith Studios is individually tailored to each client seen. While there are many things that might be universal for all vocalists, such as breathing work, warm-ups, cool downs, etc., people are all different and certainly, artists are as varied as the day is long. And so, we pride ourselves on meeting people where they are and helping them to achieve excellence in their vocal pursuits.

How does it make you feel when it’s said that you have the Midas Touch?

I’m grateful to have a track record that speaks to having delivered bankable results over a period of years and with highly visible clients. I don’t think what I do is rocket science, but if it wasn’t working for folks, I wouldn’t be in business.

Back to Justin Bieber, what led you to have him cancel Madison Square Garden? How did that go?

First of all, that was not solely my decision . . . I just got to be the girl who delivered the message, and because my opinion held the weight of Justin’s vocal performance in my hands, it was perceived that I shut the whole show down. Truth is, there were many people involved in that decision, but me breaking the news to Bieber will forever go down in history.

What has been some of the best advice you ever got?

My Dad always used to say, “Plan your work, and work your plan.” My Mom still says, “This is the day the Lord has made – rejoice and be glad in it.” I think that about sums it up.

How do you feel about what lies ahead?

I’m excited about the prospects and to continue doing what I do to help change the world one voice at a time!

For more information on Mama Jan, go to www.jansmith.com