We had the pleasure of speaking with Molly Hamilton of indie rock band, Widowspeak, who are rising up the musical ladder, having played the prestigious SXSW and were featured in entertainment publication, Interview Magazine. Guitarist and singer, Molly, leads the band with her long-time friend, Robert Earl Thomas on guitar. Having only been in formation since 2010, the band is making great strides with their music, from being critically acclaimed with their debut self-titled album.Their latest release, ‘The Swamps,’ is filled with lush, nature-influenced themes with nostalgic remnances that will take you to seasons past. The record was released in October of this year, and they will soon have their third record in the works. Read on to discover more about Molly, their North American tour, the themes behind their music, and ideas for their future album:

How’s the tour been going so far?

Molly: The tour’s been great so far. We started out opening for Iron and Wine in Southern Canada and Midwest US. It was really amazing. We played Austin City Limits Festival which was also really incredible. From there, we’ve gone off on this headlining thing; from the West Coast back over through the mountains with Pure Bathing Culture. It’s been really great. We’re kind of navigating how to play our song live since we have our new EP out; we’re kind of trying to figure out how the songs are going to live on stage.

How do you connect with an audience with your music when the band performs?

Molly: Umm, I think it’s something I’m learning to do more and more. I was nervous for a while, but I think at this point, it’s just about having fun. I think people get kind of surprised when we’re not more stoic on stage, but a lot of times we’re having a good time, and we’re smiling [laughs] and interacting with each other a whole lot. That is really fun. Our songs are pretty mellow, but enjoying that can make us play better, so we try to have that come across.

You guys have a dreamy and ethereal sound. I like it. You have been compared to Hope Sandoval of Mazzy Star. While I like comparisons, do you like comparisons? What inherently influences your music; is it people, places, things or just a combination of all of them?

Molly: I mean, definitely the comparison is something I do get tired of. For a lot of people, it’s just like a really big compliment. I think that’s great, but you want to be an individual about things, too. Mazzy Star is an amazing band, but I didn’t really listen to them at all until our band had formed, and I had heard the comparison. It’s not really like a historic presence in our music. What actually influences us in our music are places, not that we’re a super-cinematic band, but we kind of try to convey a sense of place or sense of nostalgia for something; not necessarily musical nostalgia but nostalgia for a time or place. I think that for us it’s about like “I want the song to feel like this,” and we kind of write the song that way. Like with “Almanac” a lot of it was kind of like pastoral settings, not necessarily that it’s Americana, but the idea of the vastness of the American West; like spaghetti westerns meets ’70s films like ‘Days of Heaven.’ We had this set of specific images, and I even had a file full of photos on my computer that I wanted the record to feel like. I think that we kind of achieved that. The same thing with the songs; the songs were more inspired by driving through the South and just being like, I’d never been there before, so I’d never seen swamps, cypress trees, and Spanish mosses. I’m from the Northwest, so there’s a whole other set of a dreamy environment, like misty trees and stuff. I think that driving through the South made me think it’s unreal, with a sense of mystery and creepiness about it. We didn’t necessarily write songs about that, but we wanted there to be this sort of feeling of like swampy stillness, and creepinees, too. I don’t really know what we’re doing with the next record; maybe toying with the idea of mid-century modernism, like Cold War sort of design. It’s not necessarily a place yet, it’s just kind of these ideas of modular homes. I don’t really know, but we’ve got a lot of time to work on it. I’m already in this stage of cruising the internet and already being like, ‘this is what I want it to feel like,’ but I don’t know what that is yet.

Driving through the South, was there any particular place that has been your favorite?

Molly: Ahh, I really like Savannah; Savannah’s cool. I really like all of the areas around New Orleans, the drive to New Orleans where you’re just constantly over the Bayou the whole time, and to the side there are endless miles and miles of swamps. It’s something that if you’ve never seen before, you wonder ‘where the heck am I? This is insane!’ And New Orleans is incredibly beautiful; the architecture is just so unique and so beautiful. I had never been there until after Katrina, and am so happy that the city has rebounded. I’m happy that I got to see it. I also feel that the city has its own character that’s really amazing, and everybody there is just so out there. As a community, it has a lot more of the locals, they’re a thing, they have their own way of life. It’s not like New York, where it’s like a whole bunch of people from different places that all kind of have their own way of communicating and being, and then there’s some local New Yorkers in there. I feel like New Orleans has this local sensibility about it which is really cool. I also romanticize this, but It’s warm there [the South] and not as cold as it is in the North. I don’t know if I can handle the summers there, though.

Watch the video for their single, “Locusts”: 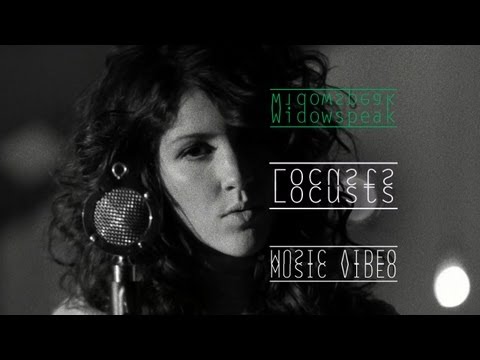 Are there any new diversions on your as-yet-untitled upcoming album? Are you going to continue with the themes that Widowspeak is known for or are you going to go a bit drastic to which your fans will be surprised?

Molly: Like I said, we’re already thinking what we want it to be about. Maybe this sort of an idea of the ’50s and ’60s, and kind of like suburban America. Not like suburbs, but the home environment in certain places, and we’re thinking about that. In terms of sound, we’re listening to a lot of Brazilian music from the ’60s and ’70s; the Tropicalia compilations, like how do horn sections and string sections interact with what is basically folk rock, but really mellow. Also stuff like Lee Hazelwood and Nancy Sinatra and kind of that sort of lounge-vibe. We’re pretty mellow, and we kind of have that sort of spaghetti-western theme. We’ve been talking about how we don’t want to necessarily change our songwriting style or how the songs feel, but that’s the sort of instrumentation that we want to evoke a sense of time and place. We’re talking about using those types of instruments, but we just have to make it produced right. So, we’re doing a whole lot of home recording this year, we’re planning on going to a couple different places, practice and experiment with these new, sort-of instruments. It’s hard going into the studio knowing what you want and only having one shot to do it, and it’s wrong. We want to go into it with knowing exactly where we want strings, and where we want horns or something, but we still want to maintain who we are as a band. I don’t want it be this sort of thing where we can’t re-create it live. We still want, at the core of it, the same sort of feeling that our other records and same of sort song-structure that I write. I’m not going to try to write something weird that doesn’t feel natural. You want it to be something that’s a natural departure, instead of one that’s forced or stretched. I like the idea of having any band be like a series of novels in a collection; they all make sense together, even if they’re all about different things. That’s my kind of view about being in a band.

What are five albums or artists that you wouldn’t want to live without?

Molly: Oooohhh, well I feel like Neil Young ‘Harvest,’ and Cat Power ‘Moon Pix’ are definitely on that list. Definitely Bill Callahan’s on that list, but I don’t know which record necessarily, because there’s ‘As Smog,’ and the new Bill Callahan stuff, which is great also, and I feel like I’d also put, especially since Lou Reed just died and I remember how important Velvet Undeground was to me, and I feel like I’ve been leaving him off that list for a while. I’m going to put Tom Petty on there, because I feel like it’s the light-hearted music I never get tired of. Like the Greatest Hits itself is one of my favorite records. You need music that just like is the sing-along, but a fun sing-along.

What is your guilty music or entertainment pleasure?

Molly: Ooh, entertainment-wise, definitely Netflix has gotten me addicted to a couple of things, including but not limited to, X-Files and Star Trek: The Next Generation. I mean even shows like How I Met Your Mother I like. Netflix is definitely a guilty pleasure because you can just watch everything all at once. Especially like when you’re in the process of a creative project, and you do need distractions. I think distractions are really important because they give you time to get away from it and edit, and doing something better like going for a walk, or doing something with people. Yet, when you don’t necessarily have those options or when you just need something else, it’s nice to watch an episode of ‘this show’ and go back to your work. When you get a million episodes deep, you begin to wonder ‘Am I addicted to this show?’ [laughs]

We bonded over our mutual love of The X-Files and chatted about how much we love the show!

Thanks so much, Molly!