From studying at the University of Oxford, to starting her own micro-financing organization, Ananya Birla is a lightning bolt of passion. Growing up in India, Birla was faced with the inequalities of the world from an early age and decided to be a force of positive change. By the age of 17 years, she piloted a microfinance organization, called Svatantra, to support women entrepreneurs in rural India. 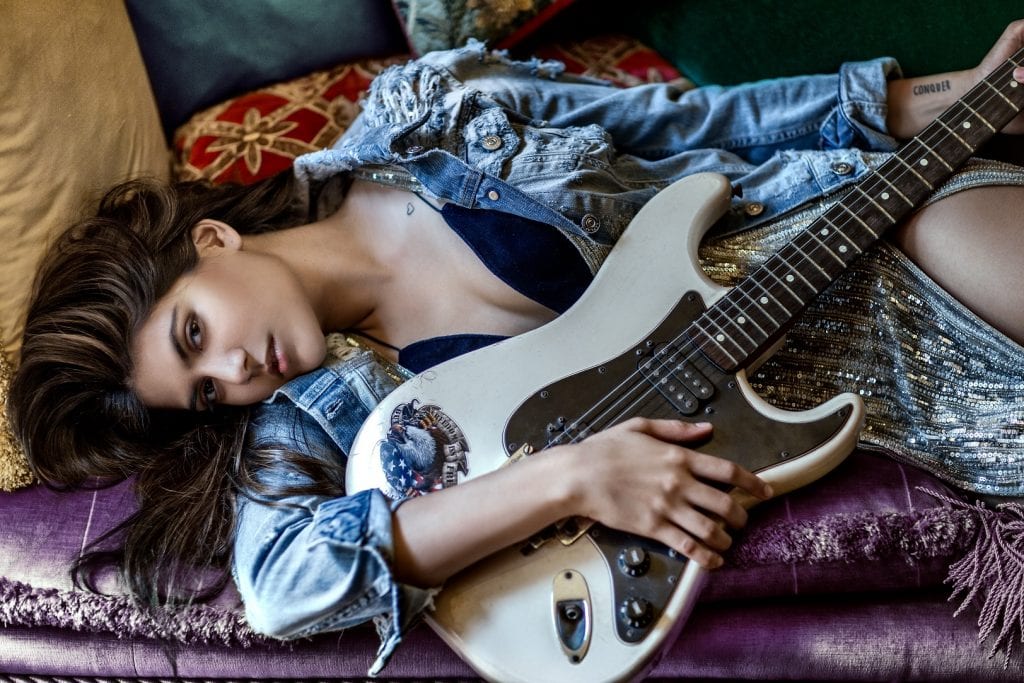 While she lived in England, she balanced playing guitar and singing at pubs with maintaining her business. She proceeded to return to India with a mental health initiative titled MPOWER, to address the stigma against those with mental illness in India. As if this wasn’t enough, Ananya piloted a second business, CuroCarte, that creates artisan handicrafts designed for elite societies across the world. Birla is a flaming hot social, economic, and political force.

After Ananya Birla released her debut international single “Livin’ the Life: (co-written by highly sought-after music producer Jim Beanz, and later remixed by popular Dutch DJ Afrojack), she recently released her newest single “Meant to Be.” Ananya Birla continues to write her own songs and gains fame, as she has over 7 million views on YouTube.

How did you learn to play the guitar?

When I was nine, I started learning the Santoor. It is a traditional Indian instrument with 72 strings and you play it on your lap. It was an amazing introduction to music which helped me to pick up other instruments quite quickly as I grew up.

As a teenager, I wanted to play something a little more contemporary. I loved Nirvana and wanted to learn to play their songs. I found an old guitar in the back of my dad’s cupboard, and found some tutorials on YouTube, and have been hooked ever since. Soon afterward, I joined a school band which really helped me to improve.

What guitar do you play?

A Taylor GS Mini. It’s really versatile, and I can play all sorts of genres on it, which is ideal when you’re in the experimental and explorative phase of songwriting and you don’t really know where the song is going to go.

How did you get involved in the English music scene?

When I was at the University in Oxford, I was writing my own songs and performing regular gigs in independent pubs, bars, and clubs around London and realized that nothing made me happier. I think it is so important that people nurture the things that enable them to express themselves. I wasn’t sure how or when it would happen, but I became committed to turning music and performing into a career.

How does your passion for social justice contribute to your music?

With everything I do, I want to make a positive difference. Whether that is with my mental health organisation MPower, which campaigns to stamp out stigma around mental health illnesses in India, with my microfinance business, which empowers underprivileged rural women, or with my music.

It is amazing when artists use music to highlight social issues. Bono has done so throughout his career, and newer artists like Kendrick Lamar and Lady Gaga have both incorporated this into their music. More and more musicians are harnessing the power of music (live music, particularly) to bring people together and create a new understanding or social movement, such as using concerts to raise money and bring people together for a cause. In 2016, I had the amazing experience of performing for Global Citizen in Mumbai. Global Citizen use their events and massive international reach to build movements for social action and I think similar events and communities are going to keep springing up to help move us forward as a human race.

I love music for music’s sake. But I also like that music offers the potential to reach and share an emotional experience with a wide audience. On a more individual level, I want to create music that connects with people and hopefully brings a smile to their face.

The inspiration for my music comes from personal experience, so I am delighted if someone hears one of my songs and can relate to the lyrics or the emotion I’m expressing, and feel a bit better about something they are going through because of that.

Is music able to contribute to economic sustainability? If so, how?

Yes, cultural and creative industries have this amazing ability to bring societies together and give people a more balanced and positive outlook. Creativity and self-expression is important for mental health, which is in turn important for the cohesiveness and productivity of a nation. It’s an important outlet for people.

Moreover, music is also one of the biggest industries in the world. Concerts, festivals, downloads, and music tourism all contribute to supporting local and national economies. I want to use music to bring India to a more international cultural platform; we have such a young, exciting and diverse population and so much potential for growth, both economically and socially. I would like to be a part of this through my music as well as my social organizations.

What has been the most rewarding experience of your musical career?

A key event, which was really exciting on a personal level, was being the first ever Indian artist to go platinum with an English single a few months ago. I felt like I had overcome a lot of personal challenges and fears to pursue my music career, and to see that it was received so well was hugely encouraging. That I did this as a female artist was the cherry on top!

Who is one of your biggest inspirations, and why?

Kurt Cobain is one of my musical heroes. I strive to create an individual connection whenever I write a song, and he has this rawness and vulnerability which helps him to resonate with all types of people from across the world. He had a particular gift for connecting with the emotional experiences of young people, he was the voice of a generation.

Do you have any upcoming creative projects?

I am releasing my next single, “Hold On,” on the 1st of March. The song sits in the electro-pop space and is about unconventional love and the social pressures that go with it. I am working on some more acoustic stuff, too, and hope to release an EP later in the year.

What advice would you give to aspiring female musicians?

Music is a pretty cut-throat industry. You need to really love it and be willing to take the ups and down in order to commit yourself to it fully. If it’s not your personal passion you won’t be able to put in the extra time and effort that is needed to succeed, and your motivation won’t be sustainable. Whenever things get difficult, remember how lucky you are to be able to do what you love.

What advice would you give to those wishing to contribute to a positive global society?

We all have an incredibly powerful weapon in our voice. If you care about something then the more you talk about it online or offline, the more impact you will make. Everyone’s voice matters. No matter where you are from, no matter what you do. The more we talk about the things that matter and the big issues, the more likely we are to solve them.