Born in Washington, DC, Paula Boggs found her passion for music at a very young age. She was born to two HBCU Howard grads, both of whom had the drive to succeed. She describes her road to music, business, and law as “a stitching of quilts.” She began writing music shortly after picking up the guitar at the age of ten. She began to find her identity and other passions that eventually led her to become the first Black woman to join the Board of Directors at Fender Musical Instrument Corporation, as announced by the company effective 2021.

“Though Fender’s products touch every corner of the globe, I also can’t think of a brand more reflecting America’s rich musical traditions from the Delta, to Appalachia, to Kansas City jazz, to Carnegie Hall to Seattle’s grunge,” said Paula Boggs. “As a longtime fan, customer, and working musician, I’m excited by Fender’s dynamic present and future. It’s an honour to join the Fender team.”

“I am excited for Paula to join the FMIC Board. Her business and legal expertise combined with her passion for music and philanthropy will be invaluable to the overall vision of the brand,” said Mark Fukunaga, chairman of Fender Musical Instruments Corporation.

Paula has had an extensive legal career. She served as the Executive Vice President, General Counsel and Secretary, Law and Corporate Affairs at Starbucks Corporation from 2002 to 2012. Before Starbucks, Paula served as an Assistant US Attorney, an attorney for the US Army, and as a partner in private practice. Among her many accomplishments, President Obama appointed her in 2013 to the President’s Committee on the Arts and the Humanities. She was also among America’s first women to receive Amy Airborne wings and a Congressional appointment to the US Naval Academy.

Eventually, Paula left the legal field to pursue other music, business, public speaking, and charitable work opportunities. One of the things I loved about interviewing Paula was her transparency in feeling a slight loss of passion for music near the middle stages of her journey. She says, “With a lot of people, you think you are on a path, and then something comes and bumps you off that path. It isn’t something you necessarily anticipate, but it sometimes just happens.” For Paula, an unexpected death of a family member interrupted her life flow. Learning how to grieve in a different way allowed her to take a look in the rearview mirror and reconnect with a passion that was truly never lost—music.

These monumental accomplishments speak volumes to her family hustle and commitment to education in every facet. Paula’s father, Nathanial Boggs, Jr., was a biology professor at Virginia State University and her mother, Janice Barber, was a certified teacher who many years later would “take herself and her four children out of the segregated south to Europe where she became a teacher in the Department of Defense school system.”

Stemming from the strength of her enslaved ancestors, Paula’s great grandfather, Robert H. Anderson, Sr., showed the determination and will to fight for things he wanted and knew he deserved. Despite every measure put in place to prevent slaves from learning, growing, and owning, her grandfather persevered and was able to own his own home by the early 1900s. This family hustle never died down; instead, it grew. 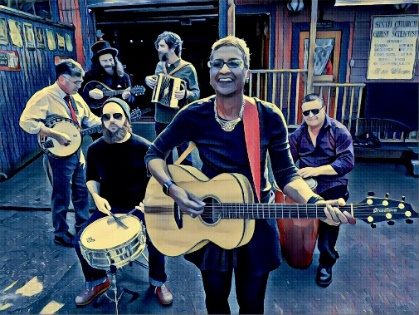 Paula’s mother was an exemplary model of a woman who “demonstrated courage with no road map,” a woman whose tenacity and endurance would demonstrate what courage really looked like, giving Paula and her siblings the confidence to pursue their dreams—and they all continue to do just that. Paula’s existence and contribution to Fender have been and will continue to be a major push in the narrative that Black women do exist, and representation does matter. Paula’s advice to young artists out there pursuing their dream is simple: “Continuing to ask yourself what do you want to do with music? Through every opportunity and setback that happens, what do you want to do with your music, and why are you in this? Never lose sight of what is in front of you. Remain authentic; that is the key.”