Joanna Connor has rightfully earned her title as the Queen of Blues-Rock Guitar. Over the past few decades, the blues-rock guitarist has played hundreds of shows worldwide and released fourteen albums reaching thousands of fans. She has had the fortune of playing with blues greats James Cotton, Buddy Guy, Jimmy Page, and Junior Wells. In the Eighties, she began performing at Chicago blues club Kingston Mines performing three nights a week, in between gigs at larger clubs and festivals, before the spread of the pandemic earlier this year.

Her most recent record, 4801 South Indiana Avenue, is a collaboration with blues legends Joe Bonamassa and Josh Smith, both of whom produced and performed on the album. The album recently hit #1 on the Billboard Blues Chart.

From the opening groove of “Destination,” the album oozes with pure attitude. Foregoing effects, it centers on raw guitar sounds and vintage amps that capture the true spirit of Chicago blues. Expertly transitioning between melancholic laments like “Bad News” to upbeat tunes like “I Feel So Good,” the LP manages to stay fresh through its entire forty-four-minute runtime.

Connor’s thunderous voice, face-melting leads, and impossibly tight grooves are tied together with a level of energy that few can rival, breathing new life into blues classics.

On choosing the title of the album, Connor said, “We chose the album title ‘4801 South Indiana Avenue’ because it was the actual street address of the hallowed funky blues sanctuary ‘Theresa’s Lounge.’ We want the listener to open that door, walk in, and feel to their core some of the magic that a place like that brought night after night. It was an honor to bring this to you, the listener.”

We got a chance to ask Connor a few questions about the new album and her career so far. Here’s what she had to say.

Tell us about your roots. Why did you start playing guitar?

My mother, rest her soul; I lost her a few months ago, was a lover of music and had marvelous and expansive taste. I heard jazz, blues, classical, rock, and funk from the time I can remember. She bought me my first guitar—a Sears classical guitar

I understand that your latest album was produced by Joe Bonamassa. How did that collaboration come about?

Joe, bless him, was sharing videos of me playing live on his social media. I reached out to him with my contact info—his first response was, “I can help you.” It made my heart jump. He was a man of his word.

You just released your new album 4801 South Indiana Avenue. Can you talk about your inspiration for the album? Would you say you went outside the box with the playing and songwriting?

This album is a vision of Joe Bonamassa, Josh Smith, and myself. It’s a tribute to the blues we have all loved; all of us have played with many of the greats, and we put our own souls’ imprint on it. We chose songs that were blues gems but not overly played. Josh wrote the closing song with a little lyrical tweaking by me.

You’ve been playing music for several decades. How has the blues scene evolved over the course of your career?

The blues scene has become heavily influenced by rock and pop. I am not a traditionalist, so that’s ok. As long as musicians seek out the roots and acknowledge the people that the blues came from—African Americans, I’m fine with that. The blues goes through ebb and flow periods. But it’s here forever

Your bio mentions that you are a mother. How do you find a balance between your musical career and your family life?

I have two fabulous kids, eleven years apart. It was not easy performing and traveling. They both traveled all over the world with me. But our homes were always about them. I separated the music life from our lives. It was my passion, but it was my job.

What does your family think of your musical career?

My family is extremely proud of me. Both of my children followed their passions as well, maybe taking a chapter from me. My daughter was a collegiate athlete now pursuing a coaching career. She is also a fabulous writer and likes to paint. My son is a hip-hop producer in LA.

Your live shows can get pretty crazy, sometimes spanning up to five hours. How do you keep up the energy through a show that long?

I had to work hard. I’m a single mom. I did what I had to do. Plus, I love playing music. It was a grind, but mostly a beautiful one.

What does it mean to you to be a female in the music industry?

Being a female in most industries has its pressures and unique circumstances. We still inhabit a man’s world, a culture that’s been predominant for thousands of years. There is more of a focus on looks for women in entertainment. But I feel that is starting to become less important.

In 2014, a video of you shredding with a slide went viral. What was the impact of this video on your overall career?

The viral video landed me a role in an upcoming movie Deep Water starring Ben Affleck. It also landed me a gig with a very prominent Russian businessman/musician. I will be touring Russia with him and the incredible bassist Nathan East next year. It also got me recognized at my local Walgreens, haha!

What’s on the horizon for Joanna Connor?

This new album is being adored by the press. It’s only been out a few days. I believe it will change my career for the better. I can’t wait to tour when it’s ok to do so. 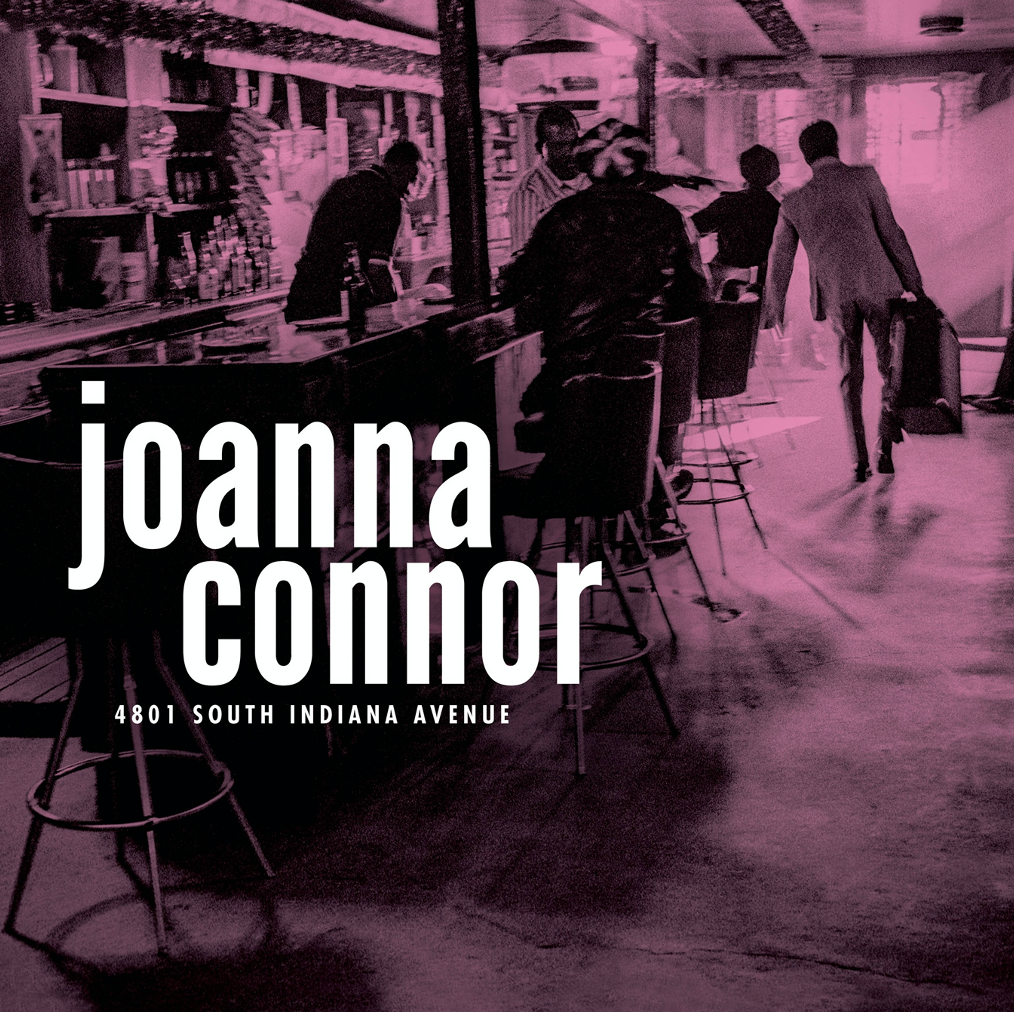 4801 South Indiana Avenue Track Listing
1. Destination (3:31)
2. Come Back Home (4:19)
3. Bad News (6:26)
4. I Feel So Good (3:35)
5. For The Love Of A Man (4:20)
6. Trouble Trouble (3:40)
7. Please Help (4:14)
8. Cut You Loose (4:09)
9. Part Time Love (5:06)
10. It’s My Time (4:39)
4801 South Indiana Avenue
Track by Track
All the songs on the new album were lovingly hand-picked by Joe and Josh Smith and were ran by me for final approval. Each song was true to the original but were given a few twists and turns with subtle and not so subtle shifts in approach, rhythm, and attack.
“Destination”
This is a real house rocking tune written by a somewhat overlooked band called The Assassins, led by Jimmy Thackeray. It was made sweeter by the soulful background vocals of Jimmy Hall. Joe and Josh joined on as well. It’s a great showcase for my frantic and frenetic guitar work.
“Come Back Home”
This song features a killer blues piano performed by Reese Wynans. Joe encouraged me to play some raw and old-school slide guitar.
“Bad News”
This is a Luther Allison song, and we chose it because we were all huge fans of his. I toured with him in Europe for almost ten years as his opening act, so it was an honor to record this haunting piece. Joe came up with the bell idea to further capture the mood.
“I Feel So Good”
This is one heavy boogie tune. The opening note I held was a fun challenge! This tune absolutely burns. Joe used some interesting microphone technique on the vocal and overdrove it purposely. The drummer (Lemar Carter) and I were flying by the seat of our pants so to speak and miraculously ended the fade out together. I particularly love the way the musicians come roaring back- all Joe’s idea!
“For The Love of a Man”
This is our Albert King tune! What blues album would be complete without one?
“Trouble Trouble”
This song features slinky horns and stellar Josh Smith guitar licks. It’s another facet of the classic blues genre that we wanted to cover.
“Please Help”
This is our tribute to Hound Dog Taylor. I believe he would have liked it.
“Cut You Loose”
This is one of my favorite songs that features a hypnotic rhythmic shift.
“Part-Time Love”
This song is a real staple in the repertoire in Chicago. I think we did it justice. A cracking horn section really makes it shine.
“It’s My Time”
This song was written by Josh Smith. It was Joe’s idea to have me do a spoken word and make some of the verses personal to me. Joe and I perform a slide duet, conjuring up Ry Cooder.
Recorded and Mixed by JJ Blair
Assistant Engineer Austin Atwood
Mastered by Bob Ludwig at Ludwig Mastering
Produced by Joe Bonamassa and Josh Smith
Executive Producer – Roy Weisman
Recorded at OceanWay Studios Nashville, TN
Musicians
Joanna Connor – Vocals, Guitar all tracks
Joe Bonamassa – Guitar on all tracks (Solos on 9 & 10)
Josh Smith – Guitar on all tracks
Reese Wynans – Keyboards
Calvin Turner – Bass
Lemar Carter – Drums and Percussion
Steve Patrick – Trumpet
Mark Douthit – Saxophone
Barry Green – Trombone
Jimmy Hall – Vocals on Track 1
Horn Arrangements by Calvin Turner