Often labeled innovative and distinctive, Elise Trouw’s music is unique and refreshing to encounter. Trouw’s vast catalog of musical influences, matched with her undeniable talent on the drums, bass, guitar, and piano, mark her as an extremely impressive musician whose individuality is what keeps audiences coming back for more.

At the tender age of 18, Trouw has obtained an outstanding following via social media, showcasing her as a lasting and celebrated presence within the music industry. Trouw has been busy touring throughout North America this year, including a stop at The NAMM Show and SXSW. Her debut album Unraveling was released last year on her own label, Goober Records, which is a compilation of ten original songs.

It is safe to assume that Trouw’s star has only just begun to rise. 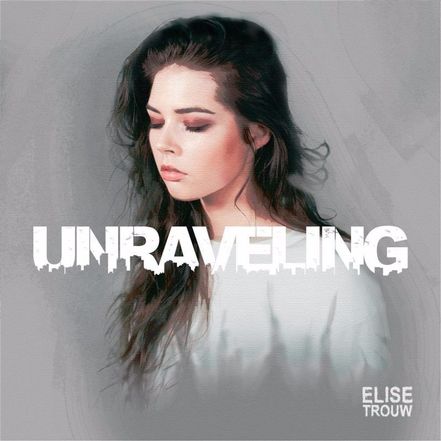 We chatted with Trouw to learn more about her background in music, her performance at NAMM, her songwriting process, attending School of Rock, and more.

I was at the NAMM Show in January and saw you perform on the Taylor stage which was great! Was that your first live looping performance?

Thank you! That was cool that you were there. Yes, that was my first one, first time looping live.

You mentioned during the performance that the live looping happened by accident. Tell us about that.

Oh, yeah, that was totally by accident. I was at my first live show using backing tracks. I was using Ableton and I accidentally hit the button that recorded myself playing and the song actually started playing back – it was kind of a funny little thing at the show. So, it was technically my first-time live looping live. (Laughs)

And look how it turned out?

Yeah! (Laughs) So, then I just kind of got into the live looping thing and from that I started watching videos of people playing that style and getting inspired by that to do it by myself.

What Taylor guitar were you playing during that performance?

I was playing with the Taylor T5z – the white one – we called it the Stormtrooper!

After your performance, you also had the opportunity to participate in a Facebook live session for Taylor where you played the Builders Edition K14ce – the one with the new V-Class bracing system. How was that?

It was such a beautiful and comfortable feeling guitar. I had fun doing the live session! There was so much going on that day.

How did you get started? You were performing in the local scene in San Diego and now you’ve been on Jimmy Kimmel. What was your big break?

Well, there hasn’t really been a big break. It’s been developing over time. I started off gradually posting videos to Instagram since I was about 15 and I developed a musician fan base from that. Then the live looping stuff- I released a couple of videos last year and those started introducing me to a whole new fan base and artist audience online. That sort of catapulted a lot of the artist community. Before a lot of the fan base was in the musician world and now it’s more into the artist world with Kimmel and other touring opportunities. So, yeah, I would say doing the live looping videos have been a big break for me. It’s actually been a great experience for me.

Let’s talk about your musical background. You started on piano when you were six, then started playing drums on Rock Band.

Yes, I started playing the drums on Rock Band when I was about 10. I liked the feel and sound of them and I enjoyed playing them even though they weren’t real drums. It made me want to play real, professional drums.

When did guitar and bass come into the picture?

The teacher I was taking drum lessons from also played guitar and that was his main instrument. I was playing with other kids and we were starting to write songs and play melodies. I was like, ‘I wanna do that, too.’ So, I started taking guitar lessons from him as well about a year or two after I started drums, but my primary focus definitely was on drums. The bass I just kind of picked up along the way.

I know you were part of the School of Rock program. Were those lessons through that program?

My first teacher was in Fallbrook where I grew up which is just north of San Diego. I also took lessons through School of Rock for drums and guitar, and mainly at School of Rock, I learned how to play with other kids and work together as a group.

Do you feel you benefited from the program and would you recommend programs like that to other young students?

Yes, I would definitely recommend getting into a program like that, or that one specifically, as early as you can if you want to be a musician. I was 10 at the time I attended and to see that there were musicians that were better than me – there were kids that were 12, 13 and 14 in the program– and that really pushed me to improve my playing. It also got me over the fear of performing live.

That’s good to hear. We focus a lot on encouraging young aspiring students and giving advice, so it’s good to hear it from someone who has experienced it personally.

Learning to do that at an early stage I think was really key for me. So, yes, I would definitely recommend it.

You started with a band. Are you still performing with the band or are you just doing your own live looping performances?

For now, just my live looping.

Listening to your music, I hear so many influences from all different genres including the ‘70s and jazz stylings. Who introduced that music to you?

A lot of the music that I’m into originated from my drum teacher, Dave Blackburn. He introduced me to Steely Dan, Tower of Power, and Police. A lot of it mainly revolved around drumming. He would tell me to go check out this drum track or this recording and then that became the style of music that I liked. Also, when I was in School of Rock, I was introduced to more classic rock type stuff like Led Zeppelin, Pink Floyd and a bunch of stuff in that world, so that’s been where the other part of my influences came from. The jazzier stuff came from high school because I was playing in the high school jazz band for about four or five years so just playing like the big band songs and all these different styles of jazz in high school opened me up to that genre.

I saw your video “The Girl from Ipanema.” I love that video and it’s just so different than what I would expect. So, I really enjoyed that one.

Thanks! I filmed that in my garage…just me. All by myself.

Good job! How do approach your songwriting process, especially with the live looping?

Do you collaborate with other people on your writing?

Oh, yes, I collaborated with Gary Hyde on some of the songs on my first album, and then lately, I have been working in different sessions with songwriters and producers up in L.A. on new material.

Are you spending more time in L.A?

Yes. I live in San Diego but pretty much all of the work I do is in L.A. between sessions and meetings. This whole year so far, I’ve been more in more in L.A. and San Francisco than I’ve been in San Diego.

We talked about social media as being a huge part of your success. What advice would you give to someone just starting out?

Just put yourself out there is the main thing because if I had never uploaded the Hit Like a Girl video, I never would have found the courage to release my album. I would never have launched the whole thing that I am doing now. Just put yourself out there and if you’re putting out content that is authentic and shows who you are and what you like to do, you will attract like-minded people. So, having authentic feed in your content is very important as well.

How about your Jimmy Kimmel experience, how was that?

Kimmel was a lot of fun! The crew was amazing and the whole performance – it definitely was the biggest production I’ve ever done. Everyone was super nice, so I felt comfortable.

Have you been approached by any other artists or bands to work with them or do you want to continue on the solo path for now?

Yes, I would be open to maybe writing or collaborating with other artists, but I haven’t been too focused on that as of right now. I’ve been working on collaborating with songwriters and producers on my solo projects at the moment. But it’s definitely something I’d be interested in, in the future, if it’s the right fit.

If you had one dream artist you could collaborate with, who would that be?

My all-time favorite is Radiohead, but I’ve been really liking new artists like Lianne La Havas and Every King. Those kinds of newer artists are some I would like to work with.

What artists do you enjoy listening besides the ones you’ve already mentioned?

More recently, I have been listening to a whole bunch. I also love a lot of older music like Steely Dan, Radiohead, The Police, Pink Floyd, a bunch of older bands. And I like pop stuff, too. I like to listen to a whole bunch of stuff.

You’re from the West Coast. Do you ever see yourself living anywhere else?

Maybe eventually. I don’t know because right now I have my parents in San Diego. I’m taking it as it comes. I think that L.A. might be where I end up, but New York would be cool too because the scene there is cool and different.

Anything new on the horizon?

I’m working on new material so I hope to be releasing some new singles. Also touring, so check my website for updates.