Honey County, the female country duo from Los Angeles, is making their mark in country music performing high energy, upbeat shows singing original music along with a few covers thrown in “because people recognize them, and it’s a lot of fun.” Bandmates Dani Rose, Devon Jane, and Katie Stump come together to form the trio fusing country and pop to create what has been described as “three-part harmonies, pop hooks, southern twang and California cool.”

We caught up with the trio following their appearance at CMA Fest to get the inside scoop on their time in Nashville, their latest EP High On the Radio, songwriting, and their upcoming single “Country Strong.”

Formed in 2014, Dani tells us the band initially started with two different girls. “We went through a couple of different cycles to find the right fit. I met Devon about three years ago. She said, ‘I know the right girl for this band.’ So she introduced me to Katie. We got together one night, and I said, ‘Hey, do you wanna play a gig next week?’ We played, it was great, and the rest is history.” If you’re wondering where Honey County is, Katie tells us, “It’s not a real place actually. It’s a place that only exists at one of our shows.”

When it comes to gear, you will find Devon, who was also the lead guitarist on Katy Perry’s Witness Tour, playing a Fender and an Ernie Ball St. Vincent guitar. “I play a Fender Anniversary Series mahogany Tele-Bration Telecaster. It’s like a weird kind of anniversary one where they’re a little bit different, but I also play an Ernie Ball Music Man St. Vincent guitar. Probably my favorite guitar I’ve ever played. It’s got a magic thing that’s like a little bit smaller scale on the neck. It’s really cool. Sounds amazing. Those are my two babes.” Dani plays Nord keyboards, while Katie plays a Fender Paramount acoustic parlor size guitar onstage. “It’s great. I love it. I mean I’ve got a million guitars, but that’s what I play onstage. Also, in the studio, I like to use whatever is available and sounds great, but I have a Taylor that I really love for studio stuff. It’s a twelve fret acoustic, and it sounds amazing.”

Honey County’s latest EP, High On The Radio, was released earlier this year and contains six fun upbeat, original catchy tunes, one of which was cowritten with fellow country artist Kalie Shorr titled “Cigarette.” The songs have garnered a great deal of praise with the single “Love Someone” as “one of the most-played songs during the launch of Radio Disney Country.”

This wasn’t their first appearance at CMA Fest, as the band previously performed in 2017. They had quite a schedule this year performing on the Spotlight Stage and the Radio Disney stage, and as Katie tells us, “We’ve played two showcases, met a lot of awesome media people, done a lot of little interviews and things, did a signing yesterday, and we met so many great fans. All these incredible artists just walking through the halls that we look up to and admire so much. It’s been such a fun, fun crazy week.”

When it comes to songwriting, Katie said it’s different every time. “We love to write, the three of us, whenever we can. And we are together a lot, and we’re all best friends. We tend to get distracted, so it helps to have another writer in the room that can kinda help us keep our focus.” Dani chimed in jokingly saying we need someone that “can herd the cats.”  Adding to that, Katie says, “Having some different creative energy to help bring a different perspective into the music helps. That’s what we kind of try to do, the three of us, plus another writer. It’s fun.” 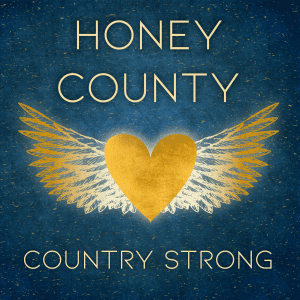 Honey County’s newest single “Country Strong” was written to commemorate the lives lost at the Route 91 Harvest Festival and the Borderline Bar & Grill shootings. The song debuted at the Stagecoach Music Festival in April with a portion of the proceeds of the song benefitting ACM Lifting Lives “Stagecoach asked us to write a song that commemorated the lives lost at the Route 91 and Borderline shootings, but at the same time also celebrate the community with a positive, upbeat, uplifting song. So we just felt that that was the most fitting title for that song because it was just such a part of what people were rallying around when all that happened,” explained Katie.

“We were also honored that ACM decided that they would partner with us so to write this song to help benefit ACM Lifting Lives,” says Dani. “That was really, really important for us to be able to make that partnership. A lot of us had friends that were at the festivals and that were affected.  When we first wrote the song because no one had yet, we asked a lot of our friends if it was okay first. That was our first priority, saying, ‘Hey, do you trust us with this?’ They gave us their blessing, and we went to work. We involved a national writer that we love to write with named Katie Shorr.”

Presenting it at Stagecoach in front of thousands of fans, they had over 150 line dancers led by Stagecoach Dance Captain Anne Marie Dunn with Borderline dance teacher Kristal Lynn Konzen. Dani said, “They were behind us and some in front of us. Many of the dancers had been at not just one festival, but at both shootings. So, they approved it, and it meant a lot to them, and they were able to put their stamp on it by creating choreography to it. It was just a really, really special, emotional performance.”

“You could feel the stomping,” says Katie. “All kinds of survivors of Route 91 and Borderline were there. Stay tuned for their upcoming music video. Dani added that “it was a really wonderful, impactful performance, and we recorded a music video. We invited the country community to be a part of the video, so we sent out a call to action, ‘Hey, please film yourself, whatever makes you country strong,’ so those videos will be included.”

Also on the horizon, the band will have two songs in the upcoming Kevin Costner Paramount series Yellowstone. “In the season finale of the second season will have two songs in it. One is “Love Someone,” which was also featured on the final season of Nashville. And then a new one called “Under Your Influence,” and it’s a duet. So we’re excited to release that.”