Nashville-based singer, songwriter, and guitar player, Bee Taylor, recently released her latest and bold single, “Who’s He Going Home With,” and collaborated with Nathan Isaac and Boone Williams of Pure Grain Records, who joined her in her musical vision. This single is one of many that will be released throughout the year, and Taylor is on a mission to release a track a month while she tours around the US.

Bee Taylor’s music is in the vein of Amy Winehouse and Elle King, among others, and her live shows are enthusiastic, with plenty of sequins, fringe, colors, sass, and attitude. Taylor is in the process of producing her singles and recording an album at FAME Studios in Muscle Shoals, AL.

What is your earliest memory that you recall when you began playing and loving the guitar?

I began playing guitar at 13, but to tell you the truth I didn’t fall head over heels in love with guitar until just a couple years ago. I know that’s a strange answer, but I originally learned guitar because I got tired of other people not playing my songs right. So up until that point, it was more of an accompaniment, not a life partner. It wasn’t until I was introduced to Gypsy Jazz Father Django Reinhardt that I truly learned how to express my voice through my fingers. When I hear his masterful hands play, I hear the pining and longing of his love for the instrument. The romance of the manouche way pulls me in like rumors to a grapevine. So even though my music is not gypsy jazz, you can still hear the influence in the licks I play and how I attack the neck.

What was it like working with Nathan Isaac and Boone Williams? How did that collaboration come about?

Working with Nathan and Boone was such a delight. They know I’m a weird cat, so they let me be me while recording. I’m not much on conventional styles of making music, it’s just got to feel good at the end of the session. And they created an environment that allowed all of us to be comfortable and crazy.

My writing process has one rule: No Rules. That means I just let the lyrics and melodies flow out of me without barriers or borders. I feel like if you start writing with preconceived notions (genre, tempo, length, rhyme scheme, etc.), you can really limit your possibilities of what the song could grow into. As far as recording goes, being in a space where I can be myself is key. If I walk into a room and the vibe is off, I’m probably not going to make music in there. It’s not about the best equipment, or the top of the line programs, or even the money to rent studio time. For me, it’s about utilizing the resources I have and making the best possible music to give to the people who want to hear it.

Your latest single “Who He’s Going Home With,” is very open and honest…can you share with us the story behind it?

Absolutely; after a show one night I saw a girl from across the room laying her hands all over my man. She later came to tell me she would be taking him home. I laughed in her face, he knows who keeps his bed warm at night! I don’t have time for nonsense like that. I wrote the song the next day.

You have several singles releasing throughout the year, and recording an album. When do you plan to have your album released?

The album will be released this fall. I’m in this new place of scaring myself musically to get out of my comfort zone, and that’s just what this project is doing. It’s invigorating, gives me that fuzzy feeling inside. 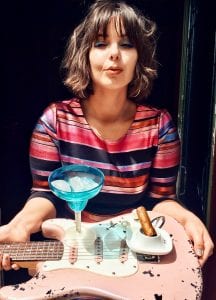 What was your first concert, and who has been your favorite so far?

Tedeschi Trucks Band was my first concert. Susan was tearing it up! Love her. My favorite I’d have to say would be Gogol Bordello, the noted originators of gypsy punk. There was so much joy radiating from bandmate to bandmate. It spilled over the audience and washed everyone’s smiling face with the melodies of the old world and the new. We all walked out glowing. It was so inspiring.

What was your first album on cassette, CD and/or vinyl?

My first cassette was Hank Williams Sr., my first CD was The Carter Family, and my first vinyl was Ray Charles.

Which five albums and/or artists would you not want to live without?

Which guitars do you own and play?

Is there a difference between the guitar you play live, and the one you record with in the studio?

Not really, there are some of my guitars I don’t take on tour with me, so that would be
the only factor. Otherwise, I keep a pretty even tally on what guitars I play live and the ones I record with.

Is there a certain guitar you really want, but haven’t purchased it yet?

Do you have all day for this list?? Oh yes, I’d like to have a baritone on board. Danelectro makes a pretty mean one, but I’m open to trying different brands at this point.

What strings and picks do you use?

I love heavy gauge strings, I feel like you can get more tone out of them and they feed your calluses. Anything from 12s and up. Picks? Anything over .80mm. No flimsy picks, whatsoever.

How about mics and pedals?

I like different mics for different things. If it’s recording, I’ll use anything from a Blue to Ear Pod mics depending on what sound I’m wanting to achieve. Live mics I can do 58s or 57s. My pedals are always inter-changing from gig to gig, but this past year I’ve had a constant of Dophix pedals from Florence, Italy. I really love their Purgatorio overdrive and at NAMM (National Association of Music Merchants) this year I got to try out their Michelangelo overdrive plus effects pedal which I really enjoyed. I also love how versatile they can be, for instance, my bandmate Jason Threm uses them with his saxophone to get gnarly sounds. I can’t say that about other pedals I’ve tried.