Tampa Bay native and Luna Guitars endorsed artist Aubrey Wollett now creates her own brand of country music from Nashville. Having opened for several artists — and a comedian — on tours around the US, Wollett is known for the beachy spin she puts on country.

Since getting her start on the business side of the industry working as an assistant to Dallas Davidson, Wollet has been up for (and won) award after award. In her interview, she talks about her upcoming EP Honest, the already-released title track, and her transition from industry to artistry.

You got your start on the business side of the music industry. Can you tell me more about what you did and what it was like?
I started interning at a few places to learn about the business side while I was in college in Nashville and ended up getting a job as a personal assistant to hit songwriter Dallas Davidson. (He has written songs for Luke Bryan, Blake Shelton, Lady A, and many more.) At the time, he had just started his own publishing company, so I was able to learn about the publishing side of the industry as well as how to be a successful songwriter. Dallas taught me that hard work, consistency, determination, and not being afraid of what others think will set you up for success. I worked with him for about three years, and it was the best experience I could’ve ever gotten.

When did you know that you wanted to start a career as an artist?
I’ve always been playing music and singing since I was little, but I wasn’t sure how to make a living from it. When I moved to Nashville to finish college at Belmont University, I was working on the business side to gain experience and make money, but I was also writing and playing at bars outside of work. After working on the business side for a few years, I realized that I’ve got to give myself a chance to create something of my own, so I went for it and started pursuing an artist career. There will never be a ‘perfect’ time to start something new, so you just gotta go for it and keep learning!

You’ve spent quite a bit of time on tour in recent years. What’s your favorite and least favorite part of touring?
My favorite part about touring is playing for different audiences in new places with new scenery. I also love meeting new people and connecting at shows. My least favorite part about touring is probably the stress of travel, that can be tough sometimes. It’s also not a glamorous life, so you’ve got to learn how to do your makeup and get ready in the car in about 10 minutes some days. 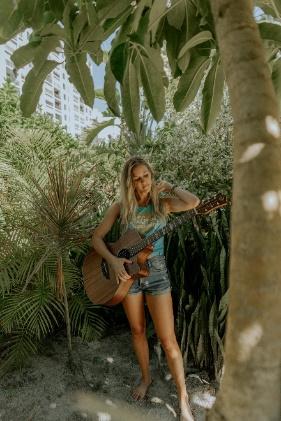 You recently released a new single called Honest, which is all about being honest with yourself and others. What do you most want listeners to take away from the single?
“Honest” is a song about realizing life isn’t always as perfect as our Instagram highlight reel, and that’s okay. My hope is that the listener doesn’t feel as alone and embraces authenticity.

I hear there’s an EP in the works — is there anything on it that you’re particularly excited about?
Yes, the EP is a collection of songs written and recorded during the pandemic in 2020. The title track is “Honest,” which is the theme of it all. I’ve released three songs from it already, “Honest,” “Friends With Me,” and “Boots On The Beach,” with the final song releasing shortly after. The project is a chapter of songs that I wanted to share, showing a different side of my songwriting and myself as an artist.

Your last EP, Beach Vibes, is country music with a beachy twist. Would you say that your upcoming music stays with that theme, or should we expect something new?
The project is about being authentic and sharing the chapter I’ve been in for the last couple of years, so part of it is life, and the next part of the EP will have a little beach flair to it. Don’t worry; I’ll always have my Florida beachside coming out in my music.

You’ve opened for a number of big names in the music and comedy industries. Do you have a favorite act that you’ve opened for?
My favorite gig I’ve ever played opening for someone was with Jay Leno! I will never forget how kind he was and what a cool experience the show was. He even came out to my soundcheck to listen and talk to me. It was also in a theater, which was a neat experience to have a full room of a listening audience. My other favorite artist that I opened up for was a show with Hunter Hayes. He took the time to wish me luck before the show and even sat with me afterward to chat about life and music. Sounds crazy, but it is so refreshing when an artist you admire goes out of their way to be kind to the opener.

Who would you most like to open for in the future?
My dream show would be to open up for Kenny Chesney! Can you imagine the beach party the show would be!?

What advice would you give to a young woman who hopes to pursue a career in music?
Don’t be afraid to start putting music out there because there is no such thing as perfect timing. You will learn with every show you take and every song you release, and that will ultimately make you grow and become a better songwriter and artist. Also, this tip is probably overstated, but it’s so true, but just be yourself! Your listeners can tell when you are being authentic or when you are putting on an act. Now more than ever, people want to cheer on someone authentic and genuine. Go for it and don’t look back!

Photos provided by artist with permission to use.