Home Interviews Amy Ray on new album “If It All Goes South” with the...

Amy Ray of Atlanta-based Americana duo The Indigo Girls has been an iconic mainstay in Americana music as a musician, artist, and activist since she formed the band with Emily Saliers in the ‘80s.

Ray’s musical beginnings trace back to her high school days in Atlanta, Georgia, when she and Emily Saliers formed the duo that would become the Indigo Girls. The Indigo Girl’s career has been illustrious, but Amy Ray remains humble and grounded within our interview, showing her true passions while speaking on activism and how much music influences us as a society.

The Indigo Girls’ career achievements include a deal with Epic Records in 1988, a Grammy in 1990, and nearly 20 albums over more than 35 years. They have toured, performed, and collaborated with countless major names, most recently including Justin Vernon (Bon Iver), Sierra Hull, and Brandi Carlile.

The Indigo Girls have created a career that combines artistry and activism. As activists, they have supported as many great causes as they can, from LGBTQ+ rights to voter registration. Amy and Emily even founded their own organization Honor The Earth, whose mission is to create awareness and support for Native environmental issues and to develop needed financial and political resources for the survival of sustainable Native communities.

It’s so great to talk to you, Amy. I’ve been a fan for a long time. I wanted to start out by talking about the Lifetime Achievement Award that was awarded to The Indigo Girls this fall. What was that like for you? I’d love to hear your story behind that.

They contacted us and said the Americana Music Association wanted to give us this award. It’s really for activism and free speech. We were totally flattered and honored. Brandi said she wanted to present it, which was cool. She gave a really fantastic speech that really covered a lot of ground, which really elevated the award even more. We don’t place a lot of emphasis on awards in our life, but I think this one was made really special by the community that gave it to us. Especially by Brandi being there.

You’ve always been willing to speak your truth, and that’s something that I’ve totally admired. Has that been a hard experience for you over the years?

No, it honestly hasn’t. The people that we are around, they’ve mentored us and, at times, put their lives on the line for things they believe. They’ve been in jail and threatened, and so for us to speak up, or really to amplify their voices, in the native community specifically, has not been hard on us. It just adds energy to our lives and inspires us, and it’s a great community. All the different activists that we’ve met in the indigenous communities and Indian country have been amazing. They’ve mentored us in all kinds of different ways and in all different types of activism. We look at the people that we try to support and amplify in their communities, and we see how much they sacrifice and struggle in it; it pales in comparison to just speaking up about it. We’ve definitely been put in a niche and, at times, are disparaged for what we do, but it doesn’t really matter.

I want to talk next about the show at the Fox Theater and collaborating with Brandi Carlile on that. I would just love to know more about what that ambiance was and the experience that you guys had that evening.

It was fantastic. I played the Fox a lot with The Indigo Girls and have been there a lot since I was just a small child. My grandma and my Mom went there all the time, so in my family based in Atlanta, it’s been a thing. To do it with Brandi was incredible — and to have her come out was really generous of her. She’s busy, you know. I’ve known her now for 18 years, I think. I’ve seen her go from just an opener or busker, you know, working hard and paying her dues to where she is now. And she’s working just as hard now. Playing the Fox with her was a bucket list experience for us. 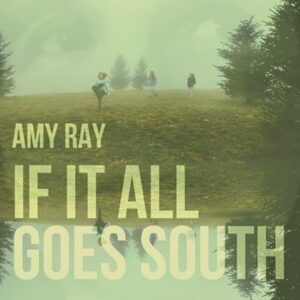 Your new album, If It All Goes South, was recorded live to tape, which isn’t always normal now. Why did you decide to make that choice for this specific album?

Pretty much all the country stuff I’ve done has been to tape. The last three records have been to tape. It’s a challenge to get that raw, natural, beautiful sound, but I love it. It’s worth it.

Could you tell our readers about the songwriting process of “A Mighty Thing”? It’s a very powerful song.

Well, it started out from just hearing a preacher talking about salvation, and he just kept saying, “Jesus died for your sins, and you have eternal life in Heaven.” He had a very graphic narrative about what heaven was, it was gold streets and all the things that you’ve heard. He just kept saying you can’t beat that deal. So I started at that point, and then I started thinking about my life growing up in the church in Georgia, and going to church a lot. I really loved it, but I also took in all this shame about being queer. But I also had a lot of great things I learned from the church that I still carry with me, and I still have quite a relationship with my church. I also drew from dealing with high school, and how powerful your teachers and mentors are. They are the people that influenced you, for better or for worse. It’s really about taking that kind of self-hate and all the ways that you will untangle all that. How do you untangle that when the things that you’ve learned when you’re so young are so powerful? You know, and, and I think I’m just talking about how screwed up I feel sometimes, you know, and it’s really about fear. Fear when you’re scared of yourself, because you feel ashamed of who you are. Or you’re scared of somebody else, when you don’t even really know who they are. I think we misplace fear often. I think we’re taught to be scared of the wrong things a lot of the time. That’s just kind of what I’m trying to untangle. It covers a lot of territory.

This album has a dazzling lineup of guest musicians and collaborators. What do you think collaborating with these musicians brings to the album that is different than if they were not on it?

It’s hard to imagine. Sarah Jarosz is a virtuoso savant on the mandolin. It’s crazy how good she has been for so long, and she’s so young. And it’s not just technically good, it’s like musically adept. In a way, she’s an old soul. She’s listening to what everybody else is playing, and she’s immediately playing the right thing and not overplaying, which is very hard to find in a person who’s such a virtuoso. I really picked people according to what I already knew they do. When we take the songs out live, it’s different because they’re not there. So we try to adapt to that missing piece. It’s totally possible, it’s a treat to have the record, you know? Natalie Hemby is on it as well, and she’s a voice that I love so much.

What is your favorite guitar to play right now?

Probably my Guild T100 1959 Hollowbody. It’s based on that old Gibson Hollowbody model from the ’40s and ’50s. Guild made a cheaper version. It’s a great guitar, but I bought it really cheap at a women-owned guitar store in Nashville at the time. I don’t know if they’re still around; it was 15 years ago. I spent some time getting it fixed up to where I wanted it to be, but that’s my favorite guitar right now. I have acoustic favorites too.

I have a Gibson J45 from the 1950s that I really loved. It wasn’t that expensive, and I don’t really buy expensive instruments I got a lot of things that I love. I also have a fantastic Melody Maker from the ’70s.

What does it mean to you to be a woman in music?

When we started a long time ago, you had to be pretty rugged to kind of get through the club system. I worked with promoters and club owners that were skeezy and weird, who tried to give you drugs all the time. In the ’80s, you know, it was a different kind of scene. We were so young when we started, so there were a lot of things that we were also kind of naive about. We didn’t really have preconceptions about what the obstacles could be, we just sort of muddled through, and I think sometimes didn’t even notice that there were obstacles. I think that’s a blessing in a way. It gives us a chance to work outside the box a little bit, and not feel defeated by the system all the time because there’s still a lot of gatekeepers that run things. They’re not gone yet, but we are here and ready to speak up always.

Are there any charities or organizations that you guys are working with right now that you’re super passionate about that you want to shout out?

Honor The Earth is always our baby. I think there needs to be a lot of support around women’s issues. There are so many groups that I couldn’t even begin to list everybody.  There’s a group called SoundGirls.org that we really love that mentors young people wanting to get into the technical side of music. So the engineering, guitar tech, lighting, and all that kind of behind-the-scenes stuff that’s really important. There’s just not enough women in the industry in those arenas. There’s another group called We Are Moving the Needle that’s doing a similar thing.