Tune in this Friday, March 8 at 9:00 pm ET/PT to watch the broadcast premiere of“Skylar Grey” on AT&T* AUDIENCE Network via DIRECTV Ch 239. The show will also be available streaming, on-demand through DIRECTV NOW and WatchTV.

on AT&T AUDIENCE Network, DIRECTV Ch 239 and streaming on DIRECTV NOW and WatchTV

Watch A “First look” As Skylar Grey Performs Her New Song “Shame On You” Today on Forbes.com (HERE)

This Friday night, five-time GRAMMY-nominated singer/songwriter Skylar Grey will bring her collection of some of the most memorable pop and hip-hop songs to AT&T AUDIENCE Network. Skylar’s songs and performances have topped the Billboard Hot 100 and iTunes sales charts, totaling more than 25 million in sales. For the concert, she will perform a mix of solo and songs and collaborations including “Shame on You,” “Love The Way You Lie,” “Glorious,” “Be A Man About It,” “Sober,” “Do You Remember,” “Aint Nobody,” “Angel With Tattoos” and “She Still Matters.”

Watch a “First Look” from “Skylar Grey” as she performs her new song “Shame On You” today, on Forbes.com (HERE).

Watch and share an interview clip with AUDIENCE Music series host Ted Stryker asGrey describes her musical history, songwriting and touring the world with EminemHERE. View another clip where the prolific songwriter and musician talks about her forthcoming solo album Angel With Tattoos (release date 2019, TBD), and her recent musical inspirations HERE. Watch the trailer for “Skylar Grey” on AT&T AUDIENCE Network HERE.

AUDIENCE Network’s multiple series of original and exclusive performances give music fans an intimate view of music’s most influential artists today. The network collaborates directly with musicians to create a unique show from their perspective.The five-time GRAMMY-nominated singer/songwriter Skylar Grey was featured onMacklemore’s PLATINUM single “Glorious,” which she performed everywhere fromGMA to Fallon to the AMAs. She also performed on SNL with Eminem for his new albumRevival, of which she wrote four songs, including “Walk On Water” featuring Beyoncé. Most recently, Grey co-wrote “Everything I Need,” the end title for the 2018 blockbuster film Aquaman with her fiancé Elliott Taylor. The duo performed the song on “Jimmy Kimmel Live!” HERE. 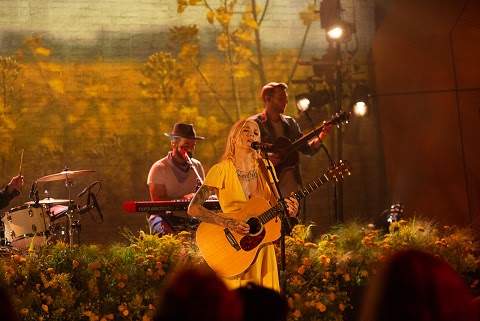 We help family, friends and neighbors connect in meaningful ways every day. From the first phone call 140+ years ago to mobile video streaming, we innovate to improve lives. We have the best network according to America’s biggest test.** We’re building FirstNet just for first responders and creating next-generation mobile 5G. With DIRECTV and DIRECTV NOW, we deliver entertainment people love to talk about. Our smart, highly secure solutions serve over 3 million global businesses – nearly all of the Fortune 1000. And worldwide, our spirit of service drives employees to give back to their communities.