Atlantic recording artist Josie Dunne has announced the release of her debut single. “Old School” is out today at all digital music retailers and streaming services and is accompanied by a very personal companion visual – inspired by her parents’ love story and shot outside the 21-year-old singer-songwriter’s family home in Chicago. Of the video Billboard stated, “…the “Old School” vid tells the full story of how their love went from platonic to lifelong and is as fun for the viewer as it was for them to make it.”

“There’s something amazing about a song that’s super happy,” says Dunne. “That’s what I wanted to accomplish with ‘Old School.’ That’s a reflection of who I am. Life is good. There isn’t really much reason to complain. I believe everything I sing. There’s truth in all my songs, but hopefully in a way people haven’t heard yet.” 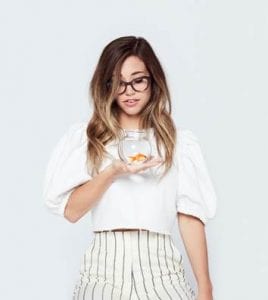 “Old School” precedes Dunne’s upcoming debut EP, “TO BE THE LITTLE FISH,” due later this year on Atlantic Records. The EP sees the Nashville-based Dunne marrying her love of Motown with the contemporary pop that she grew up listening to. The EP was co-written with Nathan Chapman (Taylor Swift, The Band Perry) and Amy Wadge (Ed Sheeran, Camila Cabello).  “Old School,” a fun, bubbly number, is the beating heart of the EP. When Josie laid it down she felt like she tapped into something essential and the other five songs from the EP came from there.

Josie Dunne grew up amongst a large family in the suburbs of Chicago, taking inspiration from her artistically minded parents and siblings while always searching for her own creative voice. She decided on a musical path early on, making monthly trips to Nashville while still in high school for collaborative sessions with a number of top songwriters and producers. When the time came to officially start her musical career, she uprooted and fully relocated to Music City where she quickly became known as a powerhouse vocalist, gifted multi-instrumentalist (including guitar, piano, bass, ukulele, and trumpet), and distinctive songwriter. The latter talent earned her a 2014 songwriting deal with Warner/Chappell, resulting in songs written for artists ranging from internet superstar Jacob Sartorius to Kelly Clarkson.