“Catch the Light (Acoustic)” is off the newly released Character (Acoustic) EP, a special five song EP released June 5 on all digital platforms including Spotify, iTunes, and Amazon, as well as physically as a stand-alone disc included in 2 CD Deluxe Hardcover Book.

From a press release regarding the EP:

Musician and visual artist Rachael Sage has released special Deluxe editions of her album Character, on both Vinyl and CD Book formats. The lovingly designed 180 gram, red and gold-colored vinyl package includes both a download card as well as 2 special limited-edition pop-out wearable Venetian eye masks, drawn and painted by Rachael herself. The colorful masks come replete with elastic and are also reversible, giving the wearer the option of coloring in the black and white side. 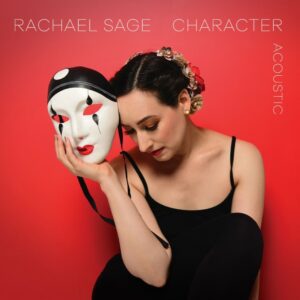 Sage, whose vibrant, pop-art inspired artwork has been shown at several galleries in downtown Manhattan, created these special Deluxe pieces in the wake of her 2018 cancer diagnosis, during a time when both art and music provided comfort, hope, and creative inspiration. Sage explains, “Once I was well enough to get back to music-making, everything just started to flow. Thematically, these songs question how we present ourselves and what we choose to hide or to reveal. I conceived these wearable-art pieces to create more of a multi-media, 3-dimensional, sensory experience for my listeners.”

These Deluxe Character packages are available via MPress Records (distributed by ILS/Caroline/Universal) and on Amazon (CD Book & Vinyl). Co-designed by Sage and her longtime design collaborator Chris Kornmann (Tori Amos, Stevie Wonder), both of these ambitious, artful Deluxe Character packages are sure to be centerpieces in your musical library. For digital-only music lovers, a special stand-alone 5 song collection of the acoustic mixes contained on Character (Deluxe) is also available now on all digital platforms including Spotify, iTunes, and Amazon.

In addition to her weekly “Stay In With Sage” Facebook Livestreams, Rachael will be performing alongside Olivia Newton-John, The Dixie Chicks, and Thelma Houston during the Global Pride 2020 online event on June 27th.

Meet the colorful, vivacious, and extraordinarily prolific force that is Rachael Sage. This industry vet and seasoned singer-songwriter has an impressive 18 albums (give or take) under her belt, she’s placed her music everywhere from Return to Amish to Inside Amy Schumer, and she’s spearheading her own label of over 20 years, Mpress Records. When she’s not busy touring all over the world, she somehow finds the time to paint or collaborate with one of the various charities she’s involved with, including Vision Aid Overseas, which helps provide optical aid and services to developing countries in Africa. Rachael took some time to chat with me on one of her rare days off from her current “PseudoMyopia” tour.