“Royal Knight” is the next single from the project’s forthcoming album, The Collaboration Project, slated to drop on April 28. 2023. The album will feature numerous collaborations with artists they’ve met on the road during their travels and is being produced alongside legendary producers and engineers Jason Orme (Alanis Morissette) and Norm Block (L7).

Who is Tarah Who? Tarah Who? is the brainchild of frontwoman Tarah Carpenter, who pumps out tour de force Riot Grrrl anthems.

Tarah shares, “I’m really sensitive to things that happen around me, and I love studying psychology and human behavior. When I write, I seek to process personal stories and news stories through these perspectives, but in a way, that’s relatable to everyone.”

During COVID lockdown Carpenter began working on new material and Chevalier joined the collaboration, and “Royal Knight” came into being. 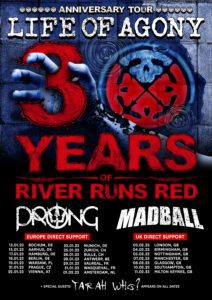 The video, directed by Javier Caudillo, depicts singularly imaginative visuals, shifting back and forth from the band playing in the nave of a church to a shadowy liaison between a dark knight and his lover.

Tarah Who? has it going on! Raw and brutally stylish, “Royal Knight” is simultaneously ferocious and chillingly bewitching.

Throughout January and February 2023, Tarah Who? will tour with Life of Agony, Prong, and Madball.

Talking with Pamela Laws about “Dry My Tears,” Her Upcoming Album, Tone, and Guitars