LP is a true force to be reckoned with as an artist — she is strong, fierce, and raw, which has brought her massive success as a performer and an established songwriter. Hailing from New York, LP uses her Italian passion and fire to create music that is indescribable, unique, and a level above in modern pop and alternative music. LP has released five albums and three EPs – including 2018’s Heart to Mouth, featuring the single “Girls Go Wild.” The single was Italy’s most-played radio hit of 2019.

Her EP Lost On You, featuring the global smash title track that reached No. 1 in 18 countries and is Diamond-certified in France, plus Platinum in Greece, Italy (4X), and Poland only adds to her massive resume of accomplishments.

Her songwriting credits include hits for icons such as Rihanna (“Cheers (Drink To That”), Rita Ora (“Shine Ya Light”), Cher (“Pride,” “Red”), Backstreet Boys (“Love Will Keep You Up All Night”), Leona Lewis (“Fingerprint”), Céline Dion (“Change My Mind”), and Christina Aguilera (“Beautiful People”).

Her latest project, the full-length album Churches was released in December of 2021 via SOTA Records, and LP is currently on a European tour followed by a U.S. tour later this year.

How has it been seeing the massive success of your album Churches?

It’s been amazing, you know? It’s kind of hard to figure it out when you are not touring, that’s the one thing. So, I’m happy to hear you say it’s a massive success, and it makes me look forward to touring more. But yeah, I think when I get out there, I’ll really understand it.

What is your favorite track on the album if you have one?

I love all of them, you know, I never can pick, that’s why they’re on the record. I gotta say, “Churches” was the first song that I wrote where I knew I was embarking on another record, and I think “Churches” is one of the cooler songs I’ve written in my life, maybe. So yeah, I love that one; I also love “When We Touch,” I love so many.

What was your experience having your song “The One That You Love” make its TV debut on Late Night with Seth Meyers?

It was great, you know again, not being there; I’ve done that show live, so the excitement of being there is quite different and quite cool. I’m happy that I got to be on it at all. That was the first single off the record, and it was pandemic time, so it was interesting to watch it do pretty well, considering no one was touring.

It was incredible. I have been doing this a while, and I never take for granted the fact that I’ve built an amazing team around myself, and you know, I’m always honored to work with all those guys. Every one of them has been coming up in their craft kind of, you know, with me and alongside me, just working together for years, so when you have that kind of knowledge of each other, it feels very simpatico. I think Churches is the result of years of working with these people.

How are you feeling about your upcoming tour? So exciting to see touring come back, and maybe I’ll catch the Nashville show at The Ryman!

You know, as soon as I am out there, I’ll know more, but we did a bit of a run in Europe at the end of last year, and it felt good. I’m kind of a touring person, so not touring has seemed very out of the norm. But yeah, I’m really looking forward to getting back out there. Yeah, please come to the Ryman show!

How does it feel to have so many major songwriting credits? Tell us more about writing for Rihanna (“Cheers (Drink to That)”), Rita Ora (“Shine Ya Light”), Cher (“Pride,” “Red”), Backstreet Boys (“Love Will Keep You Up All Night”), Leona Lewis (“Fingerprint”), Céline Dion (“Change My Mind”), and Christina Aguilera (“Beautiful People”). What an accomplishment to have under your belt.

You know, I’m still always writing songs. I haven’t been writing with people for a minute, but Celine Dion just put one of my songs on her last record, and I feel like as I am continuing to write songs that I keep those opportunities open. I didn’t really write with a lot of those people anyway; it was more like me writing songs and then them picking songs from my catalog. So, I just keep doing it, you know, just keep doing my thing.

I think it’s gotten much, much, much better. To be honest, for everyone, for people before me, I think you just must do what you do and not succumb to the opinions of others. It’s very difficult, but it is doable, and it is a real and good challenge because it makes you stronger. To be honest, I don’t think women have to worry so much anymore. I think that you still have to keep your eyes open, obviously, but I think that there’s a lot of representation for women out there now, and we have to keep it moving.

We are Guitar Girl Magazine, so we like to know about your guitars; what is your favorite guitar that you have in your arsenal to play?

I love my Nashville, my Marty Robbins size five custom guitar, tuned in Nashville tuning; I like that one a lot. And I have a ‘53 classical acoustic guitar that I love.

What do you want listeners to take away from Churches?

I want them to obviously enjoy it, and that’s another key addition to my basic body of work. But yeah, I guess just keep an open mind in life and in general. 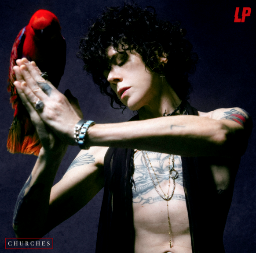