Ov Stars is the Asbury Park-based songwriting team of former Psychic TV bassist Alice Genese and Shaune Pony Heath. The duo released their debut EP titled Tuesdays on April 23, 2020. Tuesdays is a five-song EP that was produced, engineered, and mixed by Jeff Berner, another alumnus of Psychic TV, at Studio G Brooklyn and Palace Of Sports.

Genese fills us in on how the duo was formed, her background in music, the EP, her musical influences, and what’s next.

You formed Ov Stars with Shaune Pony Heath and recently released your debut EP, Tuesdays. First, tell us how the duo was formed, and second, the inspiration behind Tuesdays.

Pony and I met through my brother Leo sometime in 2016-2017. It was around the time my dearest friend and bandmate; creator and leader of Psychic TV, Genesis Breyer P-Orridge was diagnosed with Leukemia. Psychic TV was pretty much halted with the very occasional shows. Our last show was in Berlin in 2018.

I think my brother saw something in both Pony and I that we didn’t even see ourselves at the time. We became fast friends first, which eventually led to sitting down and writing music together. We began the writing process in early 2018.

The title of the EP is Tuesdays because that is the day we met to write, or talk, or cry or drink wine and bitch about stuff. It was important for us to keep a regular day, especially during the pandemic. A schedule helped us both to stay positive and to continue to work, even during a time when most of us have suffered losses. 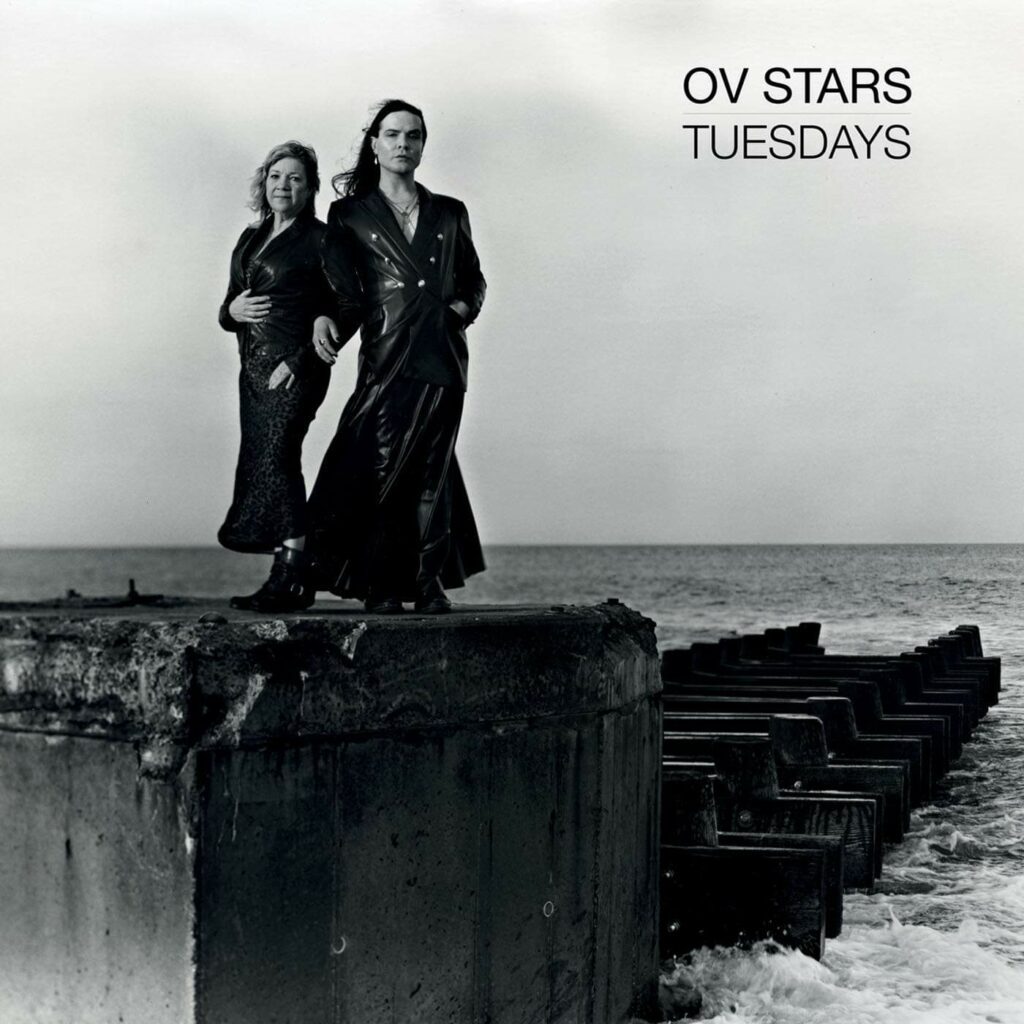 Pony is a pianist, and I’m a bass player. The first time we sat down to write together, I was playing bass and Pony played his piano. We live in two adjacent towns separated by a lake with a walking bridge to connect us. Pony walked his giant heavy-weighted keyboard over the bridge to my house, which is probably about half a mile’s distance. It was cumbersome, and we (or he) just decided it was easier to write using acoustic guitars. In another way, it leveled the playing field. Neither of us is truly comfortable playing guitar. I’m incredibly insecure about my guitar playing.

Pony and I have both lived through issues of loss and grief and trauma, and Pony, at the time, was still going through the immigration process. We both had a lot to contribute writing-wise. I tend to work through my emotions using music. I find it healing.

We share ideas and volley back lyrics together. We sit with a notebook (I usually write down as I can’t read his handwriting in the end). I think taking the time to really get to know one another helped us in our writing process. It can be a very intimate process sometimes and other times, just silly. I like how we share vocals and always support each other’s lead as backing vocalists. I think our voices unexpectedly work well together.

How did the collaboration with Jeff Berner come about, and what did he bring to the table?

Jeff Berner is my close friend and bandmate from Psychic TV. The best I can describe Jeff is as chosen family. Collaborating with Jeff was a no-brainer. I trust him more than I trust most people in the world, and I knew he would understand the intimacy of the songs and breathe into them. Having worked, traveled, and recorded with him in the past, I was incredibly comfortable. I think trust is a big factor in recording. Psychic TV recorded several records with Jeff (as guitarist and co-producer), first at Galuminum Foil Studios and then at Studio G, where he is a partner, producer, etc. I hoped recording at Studio G and working with Jeff would work for Pony as well.

Jeff not only produced the EP, but played multiple instruments, including guitars and bass. At one point, we just sort of let go and let Jeff. Again, trust…

What do you hope your fans/listeners take away with them when they listen to Tuesdays?

Beauty through perseverance, hope, and love…

Prior to Ov Stars, you played in several different bands and also recorded a solo album. Share with us a little bit about your background.

The first band I was ever in was in early 1980, Gut Bank. I had met singer/guitarist Karyn Kuhl at Montclair State College and formed a friendship. I decided one day that I’d like to play bass. I got an inexpensive bass and went to jam with Karyn, and well, just like that, I was in a band. I’m not sure how I knew how to play…I just sort of did. I had taken piano lessons as a child and played flute in school bands. I could play a little guitar, but it was really the bass that was for me. Karyn Kuhl is an amazing guitarist and lyricist. Tia Palmisano/Sproket was one of the most amazing drummers I’ve ever played with. We were all very young, and Tia was the youngest. She was still in high school. We recorded a track on a compilation on Coyote Records and, soon after, a full album, The Dark Ages, also on Coyote/TwinTone records. I also became a mother during this time.

Gut Bank was an amazing opener into what has been a many decades’ career for me.

After Gut Bank came Sexpod. Karyn Kuhl and I missed playing together, and after a lot of talks, we decided to give it another go. Karyn is like a sister to me. We asked our friend Billy Loos to join us on drums. We recorded a single on Queenie Records and then an EP titled Home on GoKart records.

We eventually decided to have Tia Sproket come back to join us and recorded Goddess Blues on Slab/BMG records. In many ways, I think that both Gut Bank and Sexpod were ahead of their time. Record labels never knew what to do with us. We were female in a male-dominated industry, and though I don’t like to make any kind of excuses in that way, I did experience it. Labels didn’t know what category to put us in, and few were willing to take the chance. I was still a young mom, and touring and sleeping on floors, being away from my son without any decent support became harder and harder. Eventually, Sexpod ran its beautiful course. I’m so glad we recorded some really powerful music.

Between Sexpod and Psychic TV, I did a short stint in a band called Candy Ass and went on tour as direct support for Pink, which was fun. Pink, by the way, is amazing. Candy Ass went on to become Pretty Boys and recorded an EP, Ghetto Rock.

In 2003 I moved on to Psychic TV and played bass from 2003 until the end when Genesis sadly succumbed to their illness. Genesis was an amazing human to be around. The amount of talent and drive to continue to create was astounding. I felt so honored to be allowed to take part in it. Getting to write music together with Psychic TV as a band was an experience I won’t ever forget. With Psychic TV, I toured all over the United States and all over the world, recorded multiple times, and put out dozens of recordings both live and in the studio. I’m incredibly grateful to have had that experience.

In 2014 I released an EP called Sticks and Bones. I began writing the material for this piece during some darker times, where I was working through loss and grief. Writing through my feelings has often helped me to make sense of them. I’m a very honest writer.

My son Jesse was playing bass at our live shows and recorded the EP in the studio. It was magical and continued to cement our already very strong bond. In September of 2013, just after mixing this project, my son very unexpectedly dropped his body.

I think, understandably, I needed to process through this tremendous loss. This trauma. What I was writing prior to working with Pony was incredibly sad. Losing a child is out of the natural order of things. It’s not something you get over or move past. At some point, you just hope to grow bigger than the pain, but the pain will always be there. It doesn’t leave. It just becomes a part of who you are. So, now I am different from who I was then.

Working with Pony allowed me to still have a voice, but to not wallow in the sorrow and grief. Not that those feeling don’t emanate in any way in the music we’ve created. What I hope people will hear is strength and hope more than loss and trauma. It’s also two people writing from their own personal perspectives, but also together. There was a beauty in being able to do this with a close and trusted friend.

What are some of your proudest works, and why?

Honestly, I’m proud of all the work I’ve done. Each came with a price in some way, and each had with them hurdles to overcome.

Who are some musicians that inspired you to pursue music?

Early on, in my youth, I was a big fan of Motown, James Brown, The Jackson 5, The Supremes, etc. This was music that spoke to me. I grew up in Hoboken, NJ, which was not gentrified at the time, and this was music I heard all around me. Later in my teens, I got more into David Bowie, Led Zeppelin, Pink Floyd, and so on. In my 20’s, it was Patti Smith, The Bush Tetras, ESG, and so many more. I was lucky enough to live a block away from a venue called Maxwell’s. There was so much music to see there. Bands from all over the country and all over the world stopped to play there. It was also a 10-minute path train ride into NYC. So pretty much everything I saw was inspiring. I mean, I could get to CBGBs in under 20 minutes.

What musicians are you listening to today?

I’ve been in a PJ Harvey phase lately. I did a recent podcast and talked about David Bowie’s The Rise and Fall of Ziggy Stardust and the Spiders from Mars, which opened up a renewed Bowie obsession of late. I also try to go listen to and support local bands in my neighborhood. I love a band called The Ribeye Brothers and Kqhyt. I love Renee Maskin’s latest recordings. I feel lucky to live in such a creative community.

When did you first pick up the bass, and what drew you to that instrument?

I was about 20 years old when I first picked up bass. I’m pretty sure it connected to the inner dancer in me. I studied dance as a younger person and was really drawn to the rhythm of the bass and drums.

Will you be touring in support of your latest music?

We don’t have anything scheduled tour-wise, but it’s something I’ve been thinking about. I’d love to get back on the road at some point.

We will have our first show with a full band on June 30th at Red Hook Studios (part of Pioneer Works) during the We Are But One art exhibit of Genesis and Lady Jaye Breyer P-Orridge. We are very honored to have been asked to be a part of the programming.